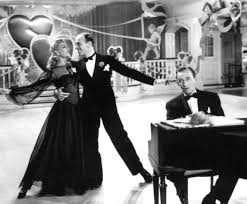 Fred Astaire and Ginger Rogers were in a lot of movies together, the best of which were Swing Time and Top Hat.  It was on the set of Top Hat that Astaire first heard the melody that would become “White Christmas.”  The tune was hummed to him by one of the great songwriting masters of the 1930s and 1940s, Irving Berlin, who was the chief songwriter for the film.  Astaire was instantly smitten by the melody.  The song, however, didn’t make the final cut for Top Hat.

Berlin, though, wasn’t finished.  The melody just needed some words.  When he was later commissioned by Paramount Pictures to write songs for each holiday to be used in a special movie that would come out in 1942, Berlin’s most difficult task was to write the Christmas song.  This was to be understood: Berlin, after all, was Jewish.  With such difficulty at hand, it made perfect sense for him to use that special melody that he had been saving since 1935 while working on the set of Top Hat.  The words came slowly, but eventually, he had it.  The song would be called “White Christmas.”  When Bing Crosby first heard the song as he and Berlin prepared for the filming of Holiday Inn (the movie wherein the song would be featured) he responded, “I don’t think we have any problems with that one, Irving.”

The song wasn’t even supposed to be the headlining feature of the film.  Another Berlin classic (written for the Valentine’s Day sequence) was supposed to be the chart-topper and award-winner.  That song was called “Be Careful, It’s My Heart.”  But, the magic of “White Christmas” couldn’t be denied.  The song was embraced by the production team, and written into the film’s finale.  The public would also embrace the song.  Not only would it go on to win the Academy Award for Best Original Song, but would also become one of the all-time most covered popular songs in history.  Bing Crosby’s rendition of the song has since become the number one (yes, number one) all-time best-selling single in the history of the music industry, selling over 50 million copies worldwide.  Berlin would go on to say that it was not only the best song that he had ever written, but the best song anyone had ever written.

One may ask why this song had such an impact.  In order to figure that out, one need look no further than the movie that gave it life.  Made just as the United States had entered World War II, this movie was a movie about America, for America, with a tendency towards propaganda and a goal to lighten the lives of a war-torn nation.  The movie features musical numbers on love and peace, Abraham Lincoln, George Washington, and Independence Day.  There is even a full slide show/propaganda piece midway through the film featuring OWI footage from the domestic assembly lines to the action overseas.

In the poignant lines of “White Christmas,” Berlin invoked in the listener a longing for home, of a distant and peaceful dream…”just like the ones I used to know.”  This touched the longings of the American people, particularly those in the services, as the film’s version of the song was the most recommended song over the Armed Forces Network during the holiday season of 1942.  The song resonated, and became an instant classic.  Not only the song, but the very movie itself, was a symbol of the finer things of the American life and how the cinema can transcend the distress of reality.  The song—and the movie—was a special “Slice of Cake” for a lot of people, and remains such today. 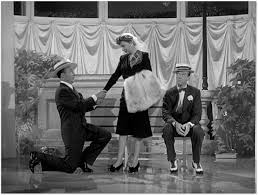 The movie itself is quite unique, springing from a conceptual idea from Irving Berlin himself and made alive in the screenplay by Elmer Rice and Claude Binyon.  The story follows two song-and-dance men named Jim Hardy and Ted Hanover (played, respectively, by Bing Crosby and Fred Astaire).  From the film’s outset, the conflict is introduced.  This was a common technique in the screwball comedies of the 1930s and 1940s (a genre that I have discussed quite thoroughly in my blog in recent months).  Movies would do an introductory sequence that was normally fast-paced and tackling several concepts at once.  In Holiday Inn, this sequence is actually two sequences in succession.  First, we see the men take turns in individual conversation with the third member of their troupe, Lila Dixon (Virginia Dale).  In these conversations, we see that Jim has fallen in love with her, and has vowed to take her away from the hustle and bustle of the entertainment industry and run off to a farm in Connecticut.  Ted, however, has wooed her away from Jim (without Jim’s being aware), with promises that she can “dance” forever.

This dynamic is solidified in the next sequence, when Jim and Ted perform “I’ll Capture Your Heart Singing.”  In the song, we see that Jim is a singing man, and Ted, predictably, is a dancing man.  They plan to use their respective strengths to woo away the girl.  One will sing to her.  The other will dance with her.  Though the song is only a performance, the foreshadowing is clear: Ted’s promises of dancing win Lila, and Jim goes to Connecticut alone.

In Connecticut, Jim starts an inn of his own, called “Holiday Inn”, a themed bed and breakfast where he would perform for each holiday of the year.  Just as he tries to do in the prophetic opening performance number of “I’ll Capture Your Heart Singing”, Jim ends up swaying a girl by the name of Linda Mason (played by Marjorie Reynolds) to join him in his entrepreneurial venture and be his performing partner.  How does he win her over?  Through song.  In particular, a song called “White Christmas”.

We follow them through a whole year’s worth of holidays, from New Year’s to Valentine’s Day, to Lincoln’s and Washington’s birthday, to the 4th of July to Thanksgiving…all the way through to Christmas and New Year’s of the following year.  For each holiday, there is an incredibly well-choreographed and beautifully written song and dance number.

But, along the way, Ted arrives at the hotel.  Lila has left him, and he is now in search of a new partner.  The partner he wants is Linda.  Again, Jim is about to watch his girl leave for Ted with all his false promises of love and his true promises of living a life of dance.  There is really only way to win his girl over in the end: through a song. 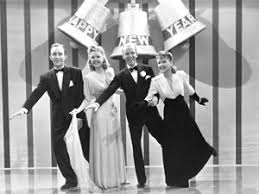 There are many great highlights in Holiday Inn—from Astaire’s beautiful duet with Reynolds in “Be Careful, It’s My Heart” to Astaire’s solo performance with the fireworks on Independence Day (both of which stand as tall as any Astaire number in his filmography).  But none bring the magic like those scenes with Crosby singing “White Christmas”.  He truly does “Capture [Her] Heart Singing.”  He captures ours, too.

Ultimately, this is more than just a Christmas movie.  This is a movie about song, dance, nostalgia, love, memories, dreams, and the American holiday.  And for a country at war, a holiday is just what they needed.