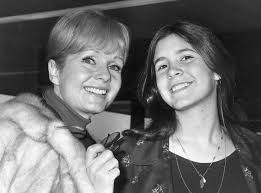 So said the legendary Debbie Reynolds regarding the way she was described by many in Hollywood and around the world.  I understand where she was coming from—what she meant—but I think her statement, made at least partially in jest, wasn’t quite right, at least as far as her career was concerned.

Debbie Reynolds had a flair for comedy, a distaste for objectification, and a magnanimous charm that elevated her characters to something far more than “cute” performers, playing their little bit parts in the shadow of her co-stars.  She detested her “cuteness,” but, like John Wayne, Humphrey Bogart, and Marilyn Monroe, her physical and character traits made her a star.  Even her name, Debbie, was a name given for her based on her character and appearance; Jack Warner (of Warner Brothers fame), when he signed her first contract with the studio shortly after winning Miss Burbank 1948, said it was just the type of name that a “cute girl” would have.

Regardless of whether she was typecast, whether she deserved her moniker, or whether this ultimately came to negatively effect her career, Debbie Reynold’s attractiveness was far more than physical, and it has indelibly left its imprint on American cinema to this very day.  Perhaps no role better defined this balance between profiling and magnificence than her role as Kathy Selden in Singin’ in the Rain.

Reynolds was the type of person that you would say never should have been there, on a Warner Brothers sound stage alongside “cinematic genius” Gene Kelly and his co-director, the famous Stanley Donen.  She was a poor girl from El Paso who never knew how to dress well or how to carry herself with grace.  According to a friend, Reynolds had maybe attended one, and only one, dance during her time in high school, she never drove a car, and she never had a boy like her.  By chance, she won Miss Burbank, which got her the contract with Warner Brothers (which the studio won on a coin toss with MGM).  She couldn’t dance, she was never in a play, she never wore dresses; as a matter of fact, by her own admission, she primarily only ever wore “dungarees and a shirt.”  Now, she was 18 years old, just out of high school, in a new state, filming dance sequences with the greatest cinematic dancer of all time from 8am to 11pm every day, without any professional training at all.

Indeed, she herself must have doubted her worthiness, as Gene Kelly (“a cruel taskmaster”) ridiculed and criticized her abilities.  Famously, one day, as she sobbed under a piano, the incomparable Fred Astaire—who was working on another film at the time—passed by.  Noticing the broken girl under the piano, Astaire decided to have Reynolds watch him perform on a neighboring sound stage.  Reynolds watched as even the great Fred Astaire struggled and fought through aches, pains, mistakes, and criticism until he got the choreography just right.  Reynolds was inspired from that moment on to put in the effort to match steps (as best as anyone possibly could) with the likes of Gene Kelly and Donald O’Connor.

In three months, Debbie Reynolds learned to do, to an extent, what Kelly and O’Connor had taken their lives to perfect.  The fighting spirit of this teenage girl developed over years eating jackrabbits shot by her hard-working father throughout an adolescence of poverty not only manifested itself in her taps and ballet numbers; it magnified an inimitable charm that explodes of the screen with each viewing of Singin’ in the Rain.  Indeed, part of the joy of Singin’ in the Rain is watching a teenager—imperfect, inexperienced, and supposedly outmatched—bring a magnanimous and sweet charm despite the wide shadow cast by her costars.  Her role was not perfect, her singing was not perfect (the studio ended up dubbing most of it), her moves were not perfect…at least, these things were not perfect from a technical standpoint.  From a character standpoint, however, Debbie Reynolds’ performance is practically unmatched.

Indeed, she was “unsinkable,” a word that she would later use as the title of her autobiography (taken from her famous performance as the titular character in The Unsinkable Molly Brown).

Reynolds would go on to great fame, at one time being the highest paid female star at Warner Brothers.  She would be nominated for Golden Globes, Tony Awards and Emmy Awards.  She would win an honorary Oscar.  Mingled among the fame and accolades, however, were many struggles.  Her first husband left her for her close friend, Elizabeth Taylor.  She struggled with health for many years. She became more recognized for television performances than her movie roles in later years; something that shouldn’t be seen as a step backward, but unfortunately, often is (or was, decades ago).

None of these lows mattered when it came to Debbie Reynolds and her lasting influence on cinema, particularly comedic and musical cinema.  Her timing, both physical and comic, has aged fantastically well, and her legacy is unmarred by the winds of time.  She was a stalwart champion of work ethic, and the power of charisma in acting performance.

For Reynolds, the perfect example of this was her performance as Kathy Selden in Singin’ in the Rain.  For Fisher, it was her iconic role as Princess Leia Organa in Star Wars.  In a role that was, admittedly, designed to be a romantic counterpart to the film’s main stars, Fisher dominated her time on screen.  What could have been another stale role thrown in for whatever shallow reasons it may have been included turned into an exhibition of charisma.  George Lucas, no doubt, realized what he had the second go-around, and Fisher’s performance under Irvin Kirschner’s direction in the sequel, Empire Strikes Back, was even more unfettered.  Fisher, in part riding the waves of the film’s fantastic financial success, in part on her own charm and magnetism, thrust herself into stardom—and it was not just any stardom; Fisher’s character was now a cultural icon, a Dorothy Gale, a Scarlett O’Hara, or a Bonnie Parker.

Fisher was in several films in my list of the greatest films ever made, beside the two Star Wars pictures mentioned above, including Hannah and Her Sisters and When Harry Met Sally….  She was also in such films as The ‘Burbs and The Blues Brothers, with each role cementing her place, alongside her legendary mother, as comedic gold.  Also, like her mother, Fisher would go through some serious hardship in her life; some hardships quite severe, among them drug abuse, depression, and bipolar disorder.  Along the way, though, Fisher became a great champion for both women and the mentally ill, fighting her way through situations that could have destroyed her.

It was a great joy to me, a Star Wars fan, to see her appear in The Force Awakens last year.  Her interpretation of Leia as a more hardened, quieter, yet equally passionate leader was timely, lent itself perfectly to the atmosphere of the picture, and felt organic to the character herself.  To paraphrase a character from that film, General or not, she’ll always be royalty to me.

The world lost two iconic stars, a mother and her daughter, in back-to-back days.  As in all these celebrity deaths, however, the same silver lining shines: we are reminded of the legacy they left behind, and go back to their great works with even more sentiment and appreciation.  Both of these women left fine legacies as celebrities, comediennes, actresses, and role models for overcoming hardship, struggle, and life itself.