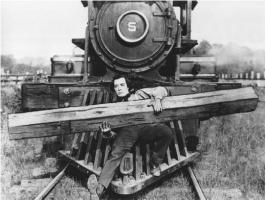 I hope I timed this well.  I stated in my review of The Godfather that certain movies are better than others for the novice movie-watcher in order to springboard into the finer world of film.  I said that Hitchcock films, Coppola films, and silent films all fit that regulatory bill.  Other films are also fitting, but for consistency’s sake, and for structure’s sake, I stated those three categories.  I intend to keep to my aforementioned schedule so as to not confuse anyone, and also so I don’t have to backtrack and edit old comments due to my own lack of foresight.   We have a Hitchcock movie and a Coppola movie under our belt already.  Now, it’s time for a silent film.

I recognize the propensity, the boldness, and the possible elitism that is inherent in claiming that silent films are a gateway to the life of the competent movie-goer.  But, I think it’s pretty true.  Movies from the 70s such as The Godfather or Star Wars share many qualities and characteristics with modern films in terms of cinematography, scoring, action, and acting.  While this fact helps ease into old or foreign classics, it can still prove somewhat detrimental because every now and again a scene will come up or a line recited that–in the mix of all this modernity–seems especially corny or outdated.  A silent film, however, is so extreme in its differentiation and uniqueness in contrast with films of today that no one can go into watching it with the same expectations.   It forces the viewer to put him or herself into a whole new world of observation and consumption; and that world gets very pleasurable as the viewer–with no expectations of contemporary fortitude in mind–out of the blue sees something innovative or modern hidden in the context of century-old celluloid.  In that regard, a silent film enables you to recognize innovation and cleverness, or even robustness and imagination (in the case of Lang, Murnau, and Griffith), in places you probably would not recognize it before.

Initially, my selection for the first review on a silent film was going to be City Lights by Charlie Chaplin–the film, in my eyes, that is remains the best and most emotional of the silent era.  But, a realization hit me that I had already reviewed two of my top ten favorite films; and whatever happened to saving the best for last?  While I certainly won’t be saving the best for a literal last, I would certainly like to hold off a little before the best of the best are all taken.

And it’s not like writing about The General is a huge step downward.  When one stops to consider the sheer amount of movies that have been made since approximately 1880 (IMDB lists at least 1,026,760…and that’s only since 1898), moving from #9 on the list and choosing to do #30 (those numbers are completely arbitrary…it depends on the day) on my list of great films isn’t all that big a deal.  The real surprise is that in choosing to do The General as my first silent film review, I not only skipped over City Lights, but also movies like The Passion of Joan of Arc and Sunrise: A Song of Two Humans.  I also skipped over the other great Chaplin silent films.  But, there is a reason to my madness.  The main point in this blog is to help demonstrate why I feel the way I do about movies and convince that other echelon of society that these movies are, actually, good.  I have followed a plan when it comes to the order I’ve presented these points, and since I’ve been able to write now about my take on action films and how they should be viewed in light of their raging popularity in the viewing sector, I am now able to provide a case analysis for the best action movie of the Golden Era of Film.  The General really is, and not just in my opinion, the grandfather and grand-master of all action films.  And not just of action films as a broad genre, but also of war-films, of action-comedies, romantic comedies, romantic-dramas and slapstick films.  A lot of birds with one stone there.

The plot is simple enough.  Buster Keaton’s period piece, Johnny Gray, travels to Georgia during the outbreak of the Civil War.  He rushes to enlist, but is not accepted in that he is too valuable in his current profession for the Confederacy–he is a railroad engineer with his own locomotive, The General.  That locomotive is one of the two great loves in his life.  The other is Annabelle Lee, played by Marion Mack.  Gray’s value as an engineer is a foreign concept to Gray himself, as he is unaware of the recruiters’ motives and feels himself unwanted and unworthy.  This is only accentuated by Annabelle Lee’s rejection of him for a much more “military” man.

Then, the perfect moment and opportunity presents itself.  And pause for a moment before you say this is cliché.  This plot came way before any of those other movies you’ve watched did.

The General and Annabelle Lee are both kidnapped by Union soldiers.  Que Johnny Gray, with his subtle charm, deadpan humor and esoteric athleticism.  The story, inspired by the tale The Great Locomotive Chase, involves just that, and it is incredibly bold an undertaking considering the fact that two locomotives chasing each other back and forth on a single rail line will obviously never overcome each other.  They are perennially single-file.  Not only is the entire anachronistic reality of the chase bleak in terms of potential, imagine the daunting nature of filming such a scene with the technology of the roaring 20s.  Much of the movie is a single scene–the chase–and it is difficult to determine where the director (Buster Keaton himself) found it necessary to cut and retake.  That is testament to the fluidity of the film and the precision of the editing.

The task of where to cut and when to retake is made even more terrifying and intimidating when one considers the nature of the scenes being filmed.  A camera must be mounted to the side, the front and the back of each respective locomotive and reach speeds substantial enough to keep up with the speeding trains.  These must move smoothly without any room for a tree, rock, fencepost or any other obstacle to hinder and block the view of the audience.

Mix in the danger.

Buster Keaton performed all his own stunts for this film, which included such tasks as jumping from train to train, climbing up and down a red-hot mantlepiece at 40 miles per hour and sitting (famously so) on the guard rail bumper of the train engine knocking wooden beams of the track before him in order to prevent his train from being derailed.   If one of those beams was not removed, imagine the final fate of Buster Keaton and The General.  Of course, dangerous feats like that were necessary and usual for the genius Keaton.  Arguably the most famous moment in the history of his films was in Steamboat Bill, Jr. when a cyclone knocks down the wall of a house behind him.  The wall falls forward, and he survives because he, unbeknownst, is standing right where the open window is upon the crash.  Imagine if you were the one in this scene.  Nothing can be bolder.  Nothing can be more nerve-racking.  But, scenes like this were commonplace to Keaton.  He often fell from second story windows to concrete sidewalks below only to get up and move on to the next scene.  He was the first king of courage in films, and he performed it with a grace that Jackie Chan could learn from.  And, when most men would have a slight shake when that wall is falling on top of them, then comes the time for the stoic, deadpan grace of Buster Keaton.  There’s not a tremble in his body.  If anything, it’s routine.

The precision, nature, boldness, and grace of The General is what makes it so great.  Because, along with the vast (though primitive) special effects, the sweet (yet simple) love story, the endearing characters and the drastic action sequences and destruction takes, it is a hilarious romp.  Few movies will ever make you laugh merely by entertaining your eyes.  Harold Lloyd and Charlie Chaplin were also directors of such films, but many would say Buster Keaton was the best.  In a world where silent films were dominated by high-budget, epic, morally-soaked historical and literary pictures from the likes of Dziga Vertov, D.W. Griffith and Fritz Lang, these stalwart entertainers made the most heartwarming, exciting and enthralling pictures of all.  And they did it by making us laugh and making us see life as something refreshingly simple.

The General is short and to-the-point.  It is also daring, adventurous and exciting. It is also very, very, very funny.  Anyone who watches this would agree.  You should give it a try.