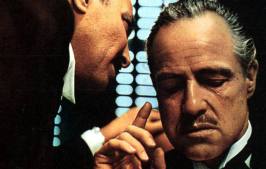 There is a somewhat calculated way that I go about selecting which films I want to review first, and I do it in accordance with what my imaginary audience would deem most useful.  If my true goal is to highlight the progression from casual to competent–and I believe that I have made that expressly clear–it would not be wise of me to jump into a review of L’Avventura or The Discreet Charm of the Bourgeoisie. What I have found to be the best springboards for development as an active movie-watcher are any Hitchcock film, most Coppola films, and, surprisingly, silent movies.  I hope to use these three sub-groups in my preliminary reviews.

I have one Hitchcock under my belt, (see my review on Vertigo).  So, now we move on to a Coppola.  By Coppola, I mean Francis Ford, known primarily for his three masterpieces: The Godfather, Apocalypse Now, and The Godfather Part II.  Other films include the fantastic The Conversation, the disappointing but still paradoxically underrated The Godfather Part III, the somewhat overrated The Rainmaker, and the “Brat Pack’s” favorite period-piece, The Outsiders.  All in all, he is quite the famous figure.  A bio and critique of Coppola is forthcoming, but in order to recognize the greatness of a film, the nature of the artist must be taken into account, and the pedigree of the artist is certainly a good starting point in order to understand said nature and prestige.

Of all Coppola’s films, the two Godfather movies are two of the most pertinent and the best made (with Apocalypse Now coming close behind the first, but ahead of the second).  In watching these epics, one can see Coppola for who he really was: Victor Fleming incarnate, and Steven Spielberg before E.T. hit the silver screen.  He was a story teller; he was plot-driven and detail-oriented, yet so focused on the overall complexion of the film that the intent and the aura were unmistakable.  I recently began rewatching the first two Godfather films with my fiancée.  The timing was perfect since I planned on reviewing The Godfather here in the blog.

First off, I put in a plug for the novel of the same name upon which the film was based by Mario Puzo.  I read it last summer during a road trip with my friends to Angel’s Landing in Zion National Park.  While one part of the novel (it is divided into parts) is completely superfluous, unnecessary, and in my opinion, tasteless, the other parts are among the best literary creations I have ever come across.  I had already seen the movie by the time I had read the book, but never had I understood the film’s under-girding and moral complexity substantially enough until I finished it.  Now, with the light of even more film-watching experience coupled with the fact that I have read the book, the movie is even more a masterpiece: it is a story of organized crime, a complete distortion of the American Dream (and therefore, a scathing satire), a tale of decline and peer pressure, and a commentary on leadership like no other movie has ever provided (sorry, Twelve O’Clock High, but you’re in second place).  The moral implications of loyalty to family vs. country vs. lover, of the legitimacy of crime and the rule of law, and the dark side of secret covenants reek of counterfeited goodness, like the serpent in the Garden of Eden, the same one who vowed to protect Cain after he killed his brother.  Promises and loyalty, protection and friendship are all signs of sacrifice, but not in this circle.  They are signs of oligarchical power.  What an ironic backdrop for a commentary on leadership and America.

Gangster movies are all satires.  Quentin Tarantino said that, in effect, in an interview for the American Film Institute.  Satire, as Russian great Nikolai Gogol demonstrated, is to teach in the “negative type,” to utilize the absence of morals to highlight the necessity for them.  It is to preach of strengths while magnifying weakness.  Read Dead Souls to better understand why I included Gogol.  He is the master of satire.  Either he or Woody Allen…watch Small Time Crooks.  What better way to satirize the American Dream than to tell of corrupt “capitalism” and the tainted “utopia”?  It reaches its zenith here.

Among the greatest of composers is Richard Wagner, known for the famous Ring of the Nibelung, perhaps most influential for his introduction of a new artistic concept known as the “Gesamtkunstwerk:”  the complete work of art.  In my page “A Slice of Cake” I reference the evolution of art, and at no time was this made more manifest than with the innovations of Wagner.  He mixed the major genres of the day: painting, fashion, opera, symphony and ballet, into grandiose performances within that famous Ring Cycle, particularly in the Valkyrie.  In essence, he provided the first ideals of the theater, and the theater mixed with photography to provide for the genesis of film.

No movie seems to provide this ideal of Gesamtkuntswerk better than The Godfather for its integration of art and story. It is, in all reality, the composite picture, combining precise cinematography with gorgeous instrumentals; the stage is then set for some of the finest satirical dialogue ever recorded: “I believe in America. America has made my fortune…” That is what Bonasera says to Vito just before he expresses his lack of trust for the police, for the courts, and for the other races that make up the American melting pot. How better to start the satire than on such an irony? The music is haunting, the acting is believable; and has the viewer ever been so quick to justify murder as they watch Michael—played by Al Pacino in his best role—put a bullet in Captain McCluskey’s head and another in his throat?

This goes back to the first of my “My Take On…” series, namely the one on suspense.  AFI’s 100 Years…100 Thrills List put The Godfather at number 11 on its list, alongside such titles as Psycho, The Exorcist, Silence of the Lambs, Rosemary’s Baby, Jaws and Alien.  It should make sense when we think of what this satire does to the viewer.  It puts you in that armchair, stroking that grey American shorthair.  You find yourself cheering for the bad guy, and that becomes all the more disheartening when you see that final scene, that symbol of Michael Corleone’s decline into the darkness of secret combinations, when the great wooden door to his study is closed slowly, closing out his beloved wife Kay.

The movement of the film is waltz-like, dealing in three major stories: the career of Johnny Fontaine, the Mafia War sparked by Sollozzo, and the succession of Michael after his father’s death.   The music is primarily in three.  There are three sons in the film, whose conflicting personalities bring color to the Corleone family.  It seems quite fitting, therefore, that the entire wedding scene is practically a waltz.  The formal rigidity of the time signature hints at class and propriety, yet it is merely a cover for the filth that lies below it.  The subtle nature of symbolism in the film–while the waltz is something I myself have come up with, others cite the Godfather’s cat, oranges, windows, doors and chairs–is refreshing and potent, quite unlike David Lynch’s Blue Velvet, which is so explicit in its symbolism it’s almost childish.  Also, like a waltz, it is subtle and quiet.  Even its climaxes tend to this consistency of near monotony.  The timbre and tempo remain homogenous; there is no slow motion, no triumphant score, and very little outbursts of dialogue except where most appropriate.  Even the motion of its characters remain constant, as well as the motion of the camera.

Consider the opening scene, which is a close-up of the aforementioned minor character, Bonasera.  Ever so slowly, the camera zooms outward.  It is so gradual we don’t even recognize it is happening until we realize that Bonasera shares the screen with Don Vito.  How symbolic a moving picture is that?  Does not Michael later on see himself in a very similar position?  Ever so slowly, the clutches of his dark side, the dark side of his family, move him downward, and not even realizing what is happening, he has taken Don Vito’s seat in that office.  And not unlike Michael, we too, the viewers, find ourselves unaware of how engrossed we have become in the story until we are also stuck in a very real way, passionately glued to the screen to find out what will happen to this family that we all hate to love.  The filmmaking really is a master-work.

Much can be said about the surface perfections manifest in the movie.  It is practically unanimous that it is one of the greatest ensemble performances ever provided (Marlon Brando, Al Pacino, James Caan, Diane Keaton, Talia Shire, Robert Duvall, John Cazale, and Sterling Hayden are all superb).  It has some of the most famous one-liners in known history (“I’m going to make him an offer he can’t refuse…”).  And it is unanimously loved.  I have yet to meet anyone, casual movie-goers or competent movie-connoisseurs, that doesn’t like this movie.  I hope that with this review, we can love it even more, and use it as a springboard to all that is clandestine in the world of cinema.