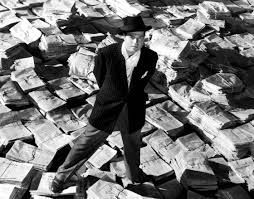 The most intimidating part of this blog is now upon me.  Part of me has wanted to do this for a long time.  Another part has been apprehensive.

The part that has wanted to do this is a powerful one.  I have wanted to do it because it is important.  After all, what good does it do to try and introduce the greatest films in cinema to the “casual movie-goer” without showing them the best of the best?  The attempt to somehow save the best for last has negative effects, because the best has played an important role in the art and without seeing the movie the role goes unnoticed.  In this regard, the amazing innovations—as manifest in other films—aren’t fully appreciated.  Doing all these lists and reviews has led to one important moment, and I can’t keep putting it off.

The part that has been apprehensive is equally powerful.    I have wanted to avoid this moment because I’d be dealing with something terribly intimidating.  I would also be dealing with something that is very important to me personally.  To risk not giving it enough respect, credit, or praise is daunting.  Also, one does not merely show the world something that really matters on an individual level without fearing a little rejection.  After all these lists and reviews, I have not been terribly intimidated by the idea of someone watching one of my movies and not liking it.  But this one, for me, is one that I hate to put out there.  I’d hate to see it disliked.

As you have probably guessed, I am talking about a review and analysis of Citizen Kane.

These two parts of me have been battling for a while now, but they have been reconciled.  How did I finally come to the decision to start my discussion of Citizen Kane?  The answer is simple: I simply remembered the first time I saw the movie.

In doing this, I realized just how foreign the Russian world was to the American one.  I realized how much variety there was on earth, and how much humanity—throughout history—could offer me.  I came home truly desiring to be a “complete person.”  But, I didn’t know how.  I desired to learn, and not only learn, but I wanted to be cultured.  There are plenty of smart people in this world, but to be truly cultured (without being priggish) was something that I envied.  Being cultured vindicated—at least for me—people’s opinions; it made them more valid and respectable.  I wanted to seek out art and culture, apply it, and find out what I liked.

Then, came Citizen Kane.  Truly, this would be momentous.  Truly, I would become a more “complete person” watching this one.  When the movie came to a close, I was pleased.  I thought it was a great movie.  I could understand, to some extent, a lot of the hype.  But, I couldn’t understand all the hype.  To me, the movie didn’t live up to its reputation.  To me, it fell into the realm of Gone With the Wind and The Maltese Falcon.  It was good, sure.  But, it was overrated.  My opinion regarding all these “overrated” films would soon change.

It wasn’t until the following summer, after returning to Brigham Young University for my second year, when my mind changed.  I was taking a break from school over the summer, working full time and watching a lot of movies.  I had moved on from the American Film Institute list of faves, from TCM’s regulars.  I had started to watch such masterpieces as Fellini’s La Dolce Vita and Renoir’s The Rules of the Game.  My tastes in film had begun to evolve, and I started to appreciate all new conventions.  My favorite movie was Coppola’s The Godfather, and I didn’t think that anything could ever change that.

One day I pulled up YouTube and simply searched “documentaries on movies”.  I watched a documentary on Alfred Hitchcock’s British films (his first twenty-some-odd movies were produced in Great Britain, as was Frenzy).  A side-panel led me to another documentary, one which I am very grateful for: Citizen Kane: Anatomy of a Classic.  I watched the documentary (it was less than an hour long) and was immediately drawn to the premise of the movie.  I was curious about all those things that I had supposedly missed.  It wasn’t the “making-of” aspects, those technological premises, that intrigued me.  It was the themes, the motifs, the acting.  Watching clips of the film sparked something inside me; I realized that this was a masterpiece of art, and that I had somehow not noticed.

Of course, documentaries can be deceiving.  I knew that principle very well.  I decided that I needed to decide my opinion on Kane once and for all.  I needed to put it to a new test: the test of a competent movie-connoisseur.

I went home, checking out a copy of the movie on the way.  I watched it that afternoon.  I was drawn in from the very opening sequence.  I never noticed how good the music was.  The production design—which at first I thought was a little strange, like an animated movie—was interesting and persuasive.   I realized that this wasn’t a movie about events, it was a movie about a person.  Orson Welles’ handsome voice was powerful and iconic.  The females—whom at first I had thought were obnoxious and corny—were perfect counterparts to the prideful chauvinism of the confused anti-hero.  There was so much depth that I had never noticed.  I think that all this was because the documentary helped point me to things I had noticed before, and I started to really appreciate the whole process of the movie’s inception.

When the movie ended, I pushed play again.  That’s right.  I watched twice in one day. This time, I realized how funny the movie was.  The whole thing was so playful.  I considered who made it: a bunch of friends and colleagues got together to make a movie.  I had done that once, when I was in high school.  We had so much fun making that movie that even though we tried to make a real movie with a serious plot, our playful approach leaked into every scene, as did our camaraderie.  The same thing was happening before my very eyes, in a movie that had been made 72 years earlier.  I felt a connection to the movie that I couldn’t help but love and enjoy.

Two days later, I watched the movie again.  I would watch it two more times after that before the week was over.  That third time, I noticed that we never hear about Kane from Kane himself, except for one word: “Rosebud.”  Everything is told from the various perspectives of those nearest him.  I came to see the slight variations, what some characters stressed and what some characters chose to gloss over.  I recognized the themes on which each respective character focused their attention, and saw the commonality in their motifs.

Most recently, I watched the movie alone in my living room.  I was in the months-long process at the time of writing a capstone research paper on William Randolph Hearst’s influence on American foreign policy and the motivating factors of his politico-literary campaigns.   Hearst was the influence for Welles’ Charles Foster Kane.  With this research in my head, I was intrigued by the ethical dilemmas, the sensationalism, the ambition, and the political savvy of Kane.  I saw a man plagued by his own desires for power, yet somehow completely idealistic.  At the same time, I saw the momentous differences between Hearst and Kane, and recognized the creative power of Welles and his co-writer Herman J. Mankiewicz (who wrote most, if not all, of the movie’s story).  There were political implications of the film that went deep.  This time, Citizen Kane was a raging satire on corruption and fame.

In essence, Citizen Kane is the best movie I have ever seen because it gets better every time I see it.  The movie doesn’t do any changing; it is the same movie every time.  I do most of the changing.  I think its versatility lies in the fact that it applies to me in every stage of life.  Granted, I haven’t been through too many life stages.  I recognize that.  But, I would be very surprised if I ever find out it doesn’t continue to effect me throughout my life.

So, it is understandable that I am intimidated to start this daunting excursion into the greatest movie ever made.  I know that from personal experience that the movie may seem to some people boring or cheesy or overrated.  I am reminded of a scene from FRIENDS when Joey and Rachel are at Central Perk and start talking about the movie Cujo.  Joey tells Rachel that he can’t believe she hasn’t ever seen Cujo.  She then responds by saying “Relax!  It’s not like its Citizen Kane.” “Have you ever tried to sit through Citizen Kane?” asks Joey.  “Yeah, I know,” Rachel replies, “it’s really boring but it’s, like, a big deal.”  (You can watch the clip here.)  I suppose I felt that way once, too.

But, upon remembering my own quest to better understand and appreciate and connect with the movie, my fears have begun to subside.  Why not be a little disillusioned by it the first time around?  And what if my readers end up never liking it?  It doesn’t matter.  The movie is the best movie ever made.  And I will dedicate plenty of time and plenty of keystrokes to demonstrating why and to giving the movie all of its proper dues.

So, over the course of the next however-long I will be taking you on a journey into the world of Kane.  I have already begun that journey with my “Fantasy Academy Award Ceremony” post, where I demonstrated a little bit of Kane’s finer points.  I hope that you enjoy it, and I hope that the whole thing makes some sense.  I hope that as you read, you give the movie a watch or two…or three.  It’ll be worth it.  I am very excited to spend so much time writing about this, my favorite movie.  I hope that you enjoy reading about it.

Please follow the links provided to navigate this series on Citizen Kane: