John Ford filmed over 140 movies over his 50-years-long career.  Many of those films were, of course, of the American Western mold, a mold in which he would provide some of his most significant innovations and grant the greatest of influences.  These innovations and influences would have their respective effects on such greats as Orson Welles (who watched Ford’s Stagecoach upwards of 40 times preparation for filming Citizen Kane) and Ingmar Bergman (who has been oft-cited as saying Ford was “the best director in the world.”)  Ford had his fingers all over the growth and skill of future directors.  Alfred Hitchcock called his movies “visual gratification.”  Akira Kurosawa admitted to be influenced by his works, having paid “close attention” to them throughout his career.  Frank Capra called him “the king of directors”, likely due to his four Best Director Academy Award victories, which to this day remains the all-time record.

Of all these praises, two are of greatest significance.  Satyajit Ray, the greatest director to ever come out of India, whose Apu trilogy stands as perhaps the most touching work of composite cinema ever committed to film, said this of John Ford: “A hallmark is never easy to describe, but the nearest description of Ford’s would be a combination of strength and simplicity.”  How was this strength and simplicity manifest?  We can use another director’s praise for Ford to answer that question.  The second bit of praise comes from Jean Renoir, the monolithic director of French film history, who, after watching one of Ford’s films, said, “I learned so much today… I learned how to not move my camera.”

Even though Ford is remembered to some extent for his mastery of montage (for more on this, check out my series on montage theory), it is his mastery of a motionless camera that is most significant.  It was this skill that made directors like Renoir and Ray so respectful of the Western King.  Watching such films as those of John Ford help us to see that the ability to frame a shot and hold it is perhaps the most important part of making movies.  When a director cares about his film, his characters, and the location upon which he or she is filming, it becomes easy for the viewer to tell because the shots are so well-framed.  We start to see less of an objective visual recitation of facts and more into the mind of the movie’s creator.  We start to see things from a perspective.  Instead of an intellectual prompt, we get an emotional connection.  John Ford’s world was made alive because John Ford had the ability to make it real.  He made it real because he treated his camera with respect; like a human eye in its own world, the camera shares with us the things that it sees in the way that it sees them.

The difference between a great Western and a poor Western is the way that this world is portrayed on film.  The world of the American Western is one of mythology, as I have stated thoroughly in my essay on the genre.  In the mythology of the American identity, the cosmology rooted in Manifest Destiny and Jeffersonian agrarianism, the most profound of dichotomies is between man and nature.  John Ford’s most profound usage of the stationary camera pitted man against the harshness of the unconquered land.  Ford would reach his peak showing this dynamic of man and his place in the world in 1956, with The Searchers.  But ten years earlier, he would lay the groundwork, and provide one of the greatest Westerns of the 1930s and 1940s (the era that I have been focusing on thus far in this blog).  The film in question: My Darling Clementine.

The movie opens with the Earp brothers moving a herd of cattle across the Arizona desert.  Already, Ford has introduced this mythological enmity between man and nature as the men are pitted against their surroundings.  The movie will follow the Earps, particularly Wyatt (who merits no introduction), as they attempt to make ends meet in a new town called Tombstone.  Along the way, they meet Doc Holliday, the retired surgeon who now awaits death by tuberculosis, and a young woman by the name of Clementine Carter.

There are shoot-outs, recitations of Shakespeare, drunk cowboys, and square dances.  But the true meat of the film is the exact same meat that gives substance to every great Western: the contrast between humans and fate, nature, and death.  It is the retelling of the American myth.  And, of all the great figures in the American pantheon, few stand as tall as Wyatt Earp.

Earp has been played by many men, among them, Kevin Costner, Kurt Russell, Burt Lancaster, Errol Flynn, James Garner, and even Jimmy Stewart.  But the greatest of performances is that of Henry Fonda in My Darling Clementine.  This is because, in My Darling Clementine, Fonda presents Earp as a man of contrast.  I’m not talking about emotional contrast.  Emotional contrast is the fodder of method actors and drama.  I’m talking about a sort of mythic contrast between the man and the unconquered land around him.  In My Darling Clementine, Tombstone is a town without anchor.  Fonda is the human who has to create order.  This is a theme that Ford would return to in the 1960s with The Man Who Shot Liberty Valance.  It was the most important theme of his total oeuvre. 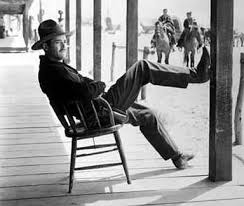 To best portray this, Fonda couldn’t be a method actor.  He had to be more subtle while at the same time becoming more caricatured.  What resulted was an infusion of his Wyatt Earp character with a sort of easygoing inertia.  Unlike Costner and Russell, who would create an Earp that was mythic in his own right (a “silhouette” according to an AMC website page), Fonda created a character that was part of a greater myth.  This greater myth was the establishment of an American culture, told in a microcosm.

As Fonda faces a land that is decidedly entropic, he must make decisions that will point towards order, which, in the Western mythology is the ultimate symbol of conquering the unconquered territory of the West.  Therefore, in My Darling Clementine, Wyatt Earp does not just play a hero, he tells the story of the American creation.  But, the conflict at hand is not only a contrast between humanity and nature, but a contrast between humanity and death.

Myth is the story of an axis deum, the theophanic union of a mortal man to his deity that gives origin to a cosmology.  In its purest sense, it is the story of a human who transcends his or status of mortality to take on a higher calling.  It is a man or woman who is granted an extra-mortal experience to play a role that will live beyond his or her own life.  The issue of legacy is, therefore, at hand when it comes to myth: what legacy does the myth-maker leave?

Hence, the conflict between humanity and death, for in order to be immortal, at least in the temporal sense, one must leave a legacy.  That is why so much of the movie’s substance plays out in the story of Doc Holliday.  His battle is the battle with impending doom.  While Wyatt has to fight against the Clantons (led by “Old Man” Walter Brennan, in an understated performance), Doc has to fight against the invincible tuberculosis, a fight he knows he will lose.  And he has to stop and think about whether or not he’s leaving anything good behind.

Like Wyatt Earp, a lot of people have played Doc Holliday, including Dennis Quaid, Kirk Douglas, Dennis Hopper, and Val Kilmer.  Kilmer’s performance is certainly the most celebrated (it even earned a nod in my Fantasy Academy Awards), and it gave needed life to the action of Tombstone.  But what Kilmer’s Holliday lacked was that it wasn’t necessary to the soul of the picture.  Victor Mature, on the other hand, was given a far more introspective Holliday to interpret.  The Holliday in My Darling Clementine is not a scene-stealer.  He is a symbol, and a necessary counterpoint to the Wyatt Earp myth.

One of the great scenes from Clementine shows Holliday facing this invincible foe with words that only Shakespeare could write.  In unison with a traveling performer, Holliday seems spiritually reborn with these words:

To die, to sleep,
To sleep, perchance to Dream; Aye, there’s the rub,
For in that sleep of death, what dreams may come,
When we have shuffled off this mortal coil,
Must give us pause. There’s the respect
That makes Calamity of so long life:
For who would bear the Whips and Scorns of time,
The Oppressor’s wrong, the proud man’s contumely,
The pangs of despised Love, the Law’s delay,
The insolence of Office, and the Spurns
That patient merit of the unworthy takes,
When he himself might his Quietus make
With a bare Bodkin? Who would these fardels bear,
To grunt and sweat under a weary life,
But that the dread of something after death,
The undiscovered Country, from whose bourn
No Traveler returns, Puzzles the will,
And makes us rather bear those ills we have,
Than fly to others that we know not of.
Thus Conscience does make Cowards of us all,
And thus the Native hue of Resolution
Is sicklied o’er, with the pale cast of Thought,
And enterprises of great pitch and moment,
With this regard their Currents turn awry,
And lose the name of Action.

This is Holliday’s dilemma, the whole “rub.”  Will he lose the name of action?  That is the most pressing question not only before him, but before Earp as well.  In the end, they face a death on their own terms, in the famous gunfight at the O.K. Corral.

And, beneath it all, is Clementine.  In so many ways, she is the most important character in this movie.  In a movie about conflict, she is the resolution.  She is the reconciliation of it all, the personification of love itself.  In all this black and white sadness, there is a glimmer of hope, a symbol of that American dream that the Western cowboy was all about.  In My Darling Clementine, that glimmer is Clementine herself.  The truest scene in the whole film, alongside Holliday’s recitation of Shakespeare, is the dancing scene with Clementine and Earp.  We see them in this scene smile.  We see their eyes embrace an intangible hope that surrounds them.  Here, we see what all this contrast and adventure about.  It’s all about the redemption.