Seven Samurai and The Samurai Trilogy catapulted the rest of the world into the newest craze in international cinema in 1954.  But, before they were winning Academy Awards in the United States and filling up art house theaters in New York and London, a movie called Rashomon had lifted the veil off the eyes of the world and onto Japanese cinema.  At no point in history had a film from Japan sent such waves worldwide, asking pertinent questions that bridged cultures and borders while simultaneously embracing elements of cinema that touched all who watched.  If there ever was movie, other than Citizen Kane, that demanded study, it was Rashomon. END_OF_DOCUMENT_TOKEN_TO_BE_REPLACED 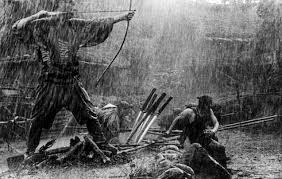 I plan on writing four different reviews on famous chanbara (or “samurai”) films.  Initially, I wanted to save the best for last, but, after writing my review on Hiroshi Inagaki’s The Samurai Trilogy, I learned that I just couldn’t wait anymore.  Were I to keep waiting, I would have to keep mentioning Seven Samurai every other line in the other reviews, and you would not have the foundational benefit of having read a review on Seven Samurai.  So, I’m going to go ahead and save the best for second. END_OF_DOCUMENT_TOKEN_TO_BE_REPLACED

In my last post, I attempted to make one point quite clear: the greatness of Citizen Kane lies in its duality.  It is part-drama, part-comedy.  It is based on truth, but shrouded in lies.  It’s a mystery with no resolution.  It is light.  It is dark.  It is black.  It is white. END_OF_DOCUMENT_TOKEN_TO_BE_REPLACED

You’ll hopefully notice the patterns.  We’re on our third Hitchcock-Coppola-Silent Film cycle.  We also just did a ten-thousand word analysis (complete with pictures) on montage theory.  Now, we will do a review on the “mother” of all Hitchcock films, one that includes the “mother” of all film montages.   Why is Psycho the “mother” of all Hitchcock films?  For those who have seen the film, the use of that word as qualifier is perfect.  This is most famous Hitchcock, containing some of the most iconic images and characters and featuring the most recognizable music.  Is it the best?  No.  Vertigo is.  But this film is certainly among his best.  While most movie critics decry its popularity because, while it is definitely a five-star film, Hitchcock has other five-star films that deserve more credit—like Notorious, Rebecca, or Rear Window.  However, I think it deserves its place.  My mood often changes, and it is most appropriate to say these films are all tied for first; but if you made me pick, Psycho would have to follow Vertigo if only for its cultural clout and haunting storyline.  It sticks with you, perhaps more than any other Hitchcock film (except Vertigo, but that holds far too many trump cards, and if I keep bringing it up, it will succeed in boxing out Psycho from its own review).  The whole nature of the film is haphazard, like a good haunted house, full of eery sounds, precipitous pictures, and a whole bunch of mentally-troubled characters.  Its very origin cries out its rawness. END_OF_DOCUMENT_TOKEN_TO_BE_REPLACED

*And supplementary lecture on the nature of silent film.

This blog is due for another silent film, and the one that I have selected is Battleship Potemkin (or, in Russian, Bronenosyets Potyomkin).  As was recently posted, Potemkin stands at number 2 on my list of the “Most Important Films of All Time.”  These are films selected strictly for aesthetic and technical innovation, with the qualification that said innovation produced radical change in the popular movie landscape, and not due to story or tertiary film elements along the lines of score, acting, or literary devices—save for those situations when one of those tertiary elements brought forth radical change (Wizard of Oz, for example).  These were, quite simply, decided upon the film itself.  Not the film as in “the movie,” but film as in the film, the literal celluloid collection.  Embracing film as a singular art medium is a necessary facet to understanding silent films, and is unfortunately lost in much of what we consider quality film criticism today. END_OF_DOCUMENT_TOKEN_TO_BE_REPLACED

While historical significance certainly plays its role in helping me determine my favorite films (see my “Greatest Films of All Time” list), other factors played equally poignant parts: my own personal bias, the impact of the film upon viewers, film quality and popularity, to name a few.  But, insofar as this blog is designed to help the casual movie-goer become a competent one, I must help by making more specialized lists.  This particular list looks at historical and cinematographic significance as a complex dual-characteristic: namely, “importance.”  Often, lists of this type go by the name of “influential.”  But “influential” means important only in the context of history and fad.  “Important,” on the other hand, involves the goal of this blog.  These films are “important” in that they help create a backdrop wherein one can contextually understand the development of film and the proper languages of film—as André Bazin would put it—which open your eyes to the world of cinema.  I wish I had paid better attention to lists like this one in my early days of movie-going.  I believe that it would have helped a lot.

The following movies were “influential” to other movies that followed.  They are “important” to you and to me, the viewers, in our attempt to become more competent movie-watchers. END_OF_DOCUMENT_TOKEN_TO_BE_REPLACED

My structure remains.  Hitchcock, Coppola, silent film.  Hitchcock, Coppola, silent film.  Hitchcock, Coppola, silent film.  Perhaps after that, I’ll move on to other things.  As for Coppola, The Godfather movies provide only so much potency.  What The Godfather enjoyed, perhaps to a greater degree than any other movie was that it was a story so stunning–and so driven by motif and character–that it probably could have made itself.  Put a director with Francis Ford Coppola’s touch behind the camera and the movie no longer makes itself, but instead becomes the most precious clay a sculptor could ever want: a clay that becomes a masterpiece by mixing the perfection of the plot with the tenacious and dexterous master’s touch.  With that being said, there is perhaps no Coppola film that better exhibits the directorial skill of its creator than 1979’s Apocalypse Now. END_OF_DOCUMENT_TOKEN_TO_BE_REPLACED