The reason why Stagecoach is so prevalent on this website—it has been mentioned in many other film reviews and analyses—is because it has such an important impact on cinema.  I used the famous Indian attack to highlight the concept of montage and its ability to exist outside of the confines of space.  I referred to its manipulation of stage direction in the same scene to demonstrate how cinema differentiates itself from theater in my analysis of Citizen Kane.   I highlighted the influence that it and other John Ford films had on such directors as Jean Renoir, Akira Kurosawa and Ingmar Bergman in my review of My Darling Clementine.   It’s on my list of the top 555 films, and was featured in my video countdown series.  This film has aged incredibly well, and its cinematographic influence can be felt in films of all kinds today.

But, there is something more than camera-work involved in Stagecoach‘s reign as one of the greatest films, not only of its era, but of all time.  I’m sure that if you’ve read my page on the American Western and my recent review of My Darling Clementine, you’re already guessing what that thing is.  Stagecoach is another epic myth of the American West.

Because this film has already been mentioned many times on this blog, I don’t think this review will be as long as my reviews usually are.  There is no need to focus too much on the cinematography or the production.  In the context of this series on Westerns, the only need that I have to satisfy in this review is the need to place the story and its images in the context of American mythology.

First, is the ever-important Ford-ian dynamic between the unconquered man and humanity.  Ford’s camera doesn’t just film the titular stagecoach as it moves horizontally on a line, but it places it in a spot on the screen to show depth and length.  The stagecoach is not the object in these frames, it is an element integrated into the object; the object, of course, being the land upon which the stagecoach rides.

This integration of the stagecoach into an independent (or unconquered) land is important when one considers the Odyssian elements of the American myth, particularly the exodus westward and the exploration of things untamed.  What Ben Hecht and Dudley Nichols did in writing the screenplay for Stagecoach was create a composite Odysseus, where Odysseus represents not the Greek, but the American, and where not one, but multiple personalities create this “American” mover.  This team-based Odyssey is yet another example of Hecht’s brilliance as a screenwriter.  Already, I have mentioned him in my blog, particularly in my “Great American Screenplays” volume one.  Considered the “Shakespeare of Hollywood”, Hecht has his name involved in writing not only of Stagecoach, but also such classics as Scarface: Shame of the Nation, The Front Page, Twentieth Century, Gone With the Wind, Wuthering Heights, Gunga Din, His Girl Friday, Spellbound, and Notorious.  His contribution to Stagecoach, though, is of particular importance when it comes to how it would create a new approach to “Odyssey” screenplays.

In the stagecoach, there ride nine unique and dynamic individuals.  There is the driver, Buck (played by Andy Devine), and his shotgun (played by George Bancroft).  Already, these two present a fun dichotomy behind the reins of the coach.  Devine, whose bumbling voice would later be survived by Slim Pickens, had come to establish his signature whiny sidekick persona.  Bancroft, on the other hand, was more stoic, playing Marshall Curly Wilcox, who has agreed to substitute as Buck’s shotgun guard in order to track down and arrest the notorious “Ringo Kid”.  They drive the coach full of seven others: a prostitute, an alcoholic doctor, a pregnant military wife, a traveling salesman, a gentlemanly gambler, and a thief.  On the journey, they pick up the Ringo Kid himself, a criminal gunslinger on his way into Lordsburg to avenge the deaths of his father and brother.  Technically under arrest at the hands of Bancroft’s Marshall Wilcox, the Kid will be the central character that ties the party together.

In particular, he would help them unite through his gallant approach to the most scorned character on the coach: Claire Trevor’s prostitute named Dallas.  From the movie’s outset, Dallas is the outcasted character.  The only reason why she was on the coach in the first place is because she had been cast out of the town of Tonto by the “Law and Order League” for her debaucheries.  Even on the stage itself, she is looked down on, particularly when one considers that the only other female on the board is the ultimate personification of the “virtuous American mother.”  But, the Ringo Kid, a conflicted and often misunderstood man himself, falls in love with this girl, and, in a way, saves her. 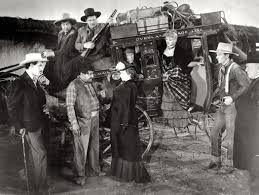 This is another important element of the mythological structure of the American Western.  André Bazin pointed out the role of women in the western myth.  There are two types of women in this mythology.  The first is the “modern Chimene”, the virgin for whom the rugged cowboy must go through a series of redemptive trials in order to become worthy.  The second is the “saloon B-girl”, a paradoxical personality  that is, herself, redeemed.  This dynamic of women is perhaps best exemplified in My Darling Clementine in the characters of the titular Clementine Carter (the modern Chimene) and Chihuahua (the saloon B-girl whose death is her redemption).  Bazin’s key observation when it comes to both of these character types is that, ultimately, they are always good.  Even the “broken” girl is inherently good, she must merely prove her goodness because society has placed her in a compromising position.  In American Western film mythology, it is the men that are pulled by forces of both good and bad.  The woman, no matter what behaviors she actually performs, is an ethical center, providing a centripetal anchor towards which the hero must move.  Always and in all things the woman is worthy of love and esteem.

In Stagecoach, the saloon B-girl is Dallas, but, as Bazin noted, her role is slightly different.  In Stagecoach, the redemption of the prostitute plays out more like de Maupassant’s Boule de Suif: she is spared a redemptive death, and almost seems to become the modern Chimene.

Her transformation isn’t a transformation of self, but a rather a transformation in the eyes of the spectator.  We, the viewers, and her fellow stage passengers change the way she is seen; they do not change who she is.  She, like most all the Western women, is good whether other people think that or not.  The character who most helps her to be seen differently is the Ringo Kid, and—paradoxically—he is the one who is most in need of true redemption of self.

Here is yet another element of the Western myth.  The redemption of self for the masculine character is often paired with a battle of strength.  This is not unlike Greek myths like those of Achilles and Hercules.  For the Ringo Kid, his path to redemption is to kill the Plummer clan and avenge the murders of his own family.  This battle transcends the law in a way that only myth can.  Even though Ringo is in custody and Curly Wilcox is watching him closely, that conflict is almost unimportant.  What truly matters is the eventual showdown with a personal adversary.

This is why the main character among these “9 strange people” (as the original theatrical poster advertised), is the Ringo Kid.  Of course, that character had to be played by John Wayne.  No actor has ever placed his stamp on a single genre to the same degree that John Wayne did with the Western.  His performance in Stagecoach can be seen, fairly, as his most mythological performance, because it was part of his earlier era, and era where acting was less important than being a manipulatable object.

“What are you talking about?” you ask.  Well, let me explain.  Before 1948, John Wayne had a reputation of being a B-actor with a slight tendency toward both manly hero and heartthrob.  In 1948, however, Wayne would star in Howard Hawks’ Red River in what would be the “role of a lifetime” for most any other actor (though Wayne would go on to have a few more roles like that).  After watching Red River, John Ford is said to have exclaimed, “I never knew the big son a bitch could act.”  From Red River on, Wayne would become more of a method/character actor, and steal the show in such movies as True Grit, The Shootist, The Man Who Shot Liberty Valance, and, of course, The Searchers.

But in 1939, John Wayne was just a set piece in John Ford’s brilliant mise-en-scène.  This works perfectly in Stagecoach.  Instead of playing a dramatic role, Wayne was playing the part of a mythological hieroglyph like a fully poseable action figure.  His Ringo Kid is not a self-conscious decision-maker, he is subject to the mythological archetype at hand.  This turns Stagecoach from a period piece to an American fable. 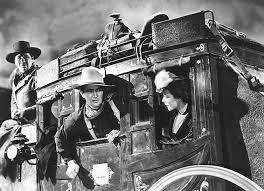 This dynamic of the characters, the way that they interact with each other and the way that they interact with the unconquered terrain around them reaches its climax in the Indian attack.  In my page on the American Western (where I discuss the genre in a broader sense), I address the cowboys vs. Indians dynamic in depth.  The Indians, like the Amazons or the Trojans, were extensions of the land on which they lived.  The conquering of the terrain, in the American myth, almost inevitably will require a showdown with the natives of the terrain.  The scene where the Apache Indians attack the rushing stagecoach remains, to this day, one of the greatest action sequence/shoot-outs ever filmed.  It was an incredibly involved production, and led Orson Welles to say that Stagecoach was the, in essence, the perfect textbook of cinematography.

To close, let me quote the great Andrè Bazin.  “Stagecoach is the ideal example of the maturity of a style brought to classic perfection. John Ford struck the ideal balance between social myth, historical reconstruction, psychological truth and the traditional theme of the western mise-en-scène. None of these elements dominated any other.  Stagecoach is like a wheel, so perfectly made that it remains in equilibrium on its axis in any position.”