One year before It Happened One Night shifted the gaze of the 1930s comedy towards romance, creating a genre that would shape American cinema for decades and decades to come, a group of writers and performers were capitalizing on the screwball comedy in its purest form, full of wit and satire and slapstick.  Speed of delivery, incoherence of plot, and satirical approaches to class and politics became the hallmark of what this blog has called (in the “My Take On…Comedy” chapter) the “anecdotal” comedy.  This subgenre of comedy (made up for this blog) is the sister genre to screwball, taking slapstick to new extremes while approaching its storyline with an anecdotal approach; what resulted from such an approach was a film that played out more as a compilation of sketches than a story in the conventional sense.  While this type of comedy would survive into the 1940s with the Marx Brothers, Charlie Chaplin, Abbot and Costello, Laurel and Hardy, and W.C. Fields (and would continue beyond the 40s in gimmicky novelty films like Airplane! and the Monty Python movies), the ultimate anecdotal-screwball comedy was released in 1933.  It was the crème de la crème of all the Marx Brothers films—the most funny, the most political, the most daring, the most memorable—Duck Soup.

It may seem difficult to glean exactly what the movie is about after hearing only the title.  When asked what the title was supposed to mean, Groucho Marx famously explained: “Take two turkeys, one goose, four cabbages, but no duck, and mix them together. After one taste, you’ll duck soup for the rest of your life.”  In actuality, the movie’s title was recycled by director Leo McCarey from a failed project he had done earlier with Laurel and Hardy.  “Duck soup” meant something that was done easily, and few people made anything look as easy as Groucho made being funny look easy.

Actually, I think that Groucho’s joke about the movie’s title is incredibly fitting.  There are a lot of turkeys, geese, and cabbage crammed into McCarey’s frames in Duck Soup.  Compared to other Marx Brothers films, this movie is the best example of filling the screen with objects: the riotous reception hall of the palace, the destructive scenes of the final battle and other scenes are loaded with extras, props, and movement.  While they would return to this sort of crowded comedy in other films—notably the cabin sequence in Night at the Opera—the Marx Brothers and the people directing them behind the camera never had such a jam-packed picture.  Cinematic cognates and loanwords like mise-en-scène seem out of place when talking about a joke-laden satire like Duck Soup, but when you realize the cinematic power that Duck Soup has, you realize that it is absolutely deserving of the full critical approach, regardless of its genre.

The film’s quality as a product of its medium—and its consideration as a masterpiece in critical circles—owes itself to its director, Leo McCarey.  Many men directed the Marx Brothers over the course of their 38-year comic career in film, but none were as talented as Mr. McCarey.  Three of his films, Duck Soup, An Affair to Remember, and The Awful Truth, are in my list of the top films.  He had a knack for directing flamboyant and dominant characters and channeling it into a great dramatic effort.  His was the last of the Marx Brothers films to be filmed for Paramount Pictures, and the last to feature all four of the Marx Brothers—Zeppo would never again star in a Marx Brothers movie.  To say that he was the last of a special era in their filmography would be an understatement.  He directed them when they were at their best, and had a great team in place to help him. 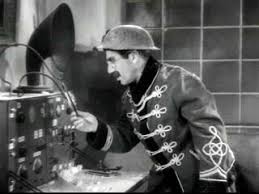 Duck Soup was not only the last Marx Brothers movie to feature Zeppo and the Paramount production team, it was the last to feature one other key human ingredient: Herman J. Mankiewicz.  For those familiar with my blog, Mankiewicz is somewhat of a celebrity.  He can be fairly regarded as one of the all-time greatest screenwriters, and may be the most important screenwriter of 1930s and ’40s American comedy.  He had already produced and co-written (without credit, mind you) two Marx Brothers films (Horse Feathers and Monkey Business) and had written some of the most important pieces of comedy of the early 30s: Dinner at Eight, Laughter, and Million Dollar Legs.  He would go on to write The Wizard of Oz, Citizen Kane, and Pride of the Yankees.

Mankiewicz was an uncredited writer who assisted the fantastic team of Bert Kalmar, Harry Ruby, Arthur Sheekman, and Nat Perrin.  Perrin was good friends with Groucho, and likely contibuted a lot to Duck Soup‘s fantastic utilization of Groucho’s talent.  Groucho’s talent transcended screenplays, much like Robin Williams’ did.  As a matter of fact, Williams—a pioneer in stream-of-conscious comedic performance—was often compared to Groucho.  The two remain, to this day, the most perfect examples of that type of comedy in known history.

So, it wasn’t just Mankiewicz and the writers.  Groucho Marx himself was an important contributor to the success of Duck Soup, a success that was born of its script as well as its appeal to the language of cinema.  McCarey, whose contributions to the latter have already been described, was also a contributor to the film’s written success.  He, along with Chico and Harpo, were the masterminds behind some of the story’s best visual gags: the famous “mirror scene” where Groucho and Harpo mimic each other on opposite sides of an empty door frame was supposedly McCarey’s idea.  Chico and Harpo would take visual gags to new heights (or perhaps, better to say, “heights roughly equal to those of Chaplin and Keaton”) with their hilarious antics as street vendors/spies.

What we can see here is how much of a composite effort the comedy was.  The script is so perfect because it was the correlated approach between many equally-invested comedic minds.

The role of Mankiewicz, though uncredited, is obvious.  After he left the scene (when the Marx Brothers moved to MGM), a new era of Marx Bros. film began.  This new era (highlighted by 1935’s A Night at the Opera) would move the Marxes to supporting roles, working as a three-man composite (Zeppo was out) comic relief.  The main characters would be played by actors that the production studio hoped could ride the Marxes popularity to significance in the industry.  So began the era of musical Marx Brothers films, where full sequences would be dedicated to the other actors’ musical serenades and plot predicaments.  While Mankiewicz was “on the scene,” though, the Marx Brothers movies would focus on the Marx Brothers themselves.  The four brothers would be the lead roles, playing characters with significance to the story, not just foils to other performers.

Mankiewicz and the others used the signature shticks of each of the Brothers to create characters that could play perfectly satirical roles.  I mention Mankiewicz in particular because of his already well-documented ability to handle satire.  His boldness was born of a close proximity to real life political power-figures.  In Rufus T. Firefly, the writers of Duck Soup (with Mankiewicz’s help) would create one of the great satirical figures in cinematic history, a character that would stand alongside Peter Sellers’ trifecta in Dr. Strangelove and Chaplin’s own “Great Dictator.”

Firefly was Groucho’s character, putting Groucho in the lead role.  This was where he was most comfortable.  He was the most vocal of the four brothers, with a rapier wit that he wielded like a two-edged sword.  A two-edged sword is a great metaphor; he was the best of all the screwball comedians (Mae West included) at the famous double entendre that characterized the genre.  As Firefly, Groucho would point a mocking finger at the power-politics of Europe while at the same time seeming to do whatever it took to get a laugh. 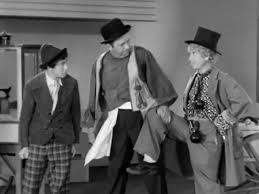 As a matter of fact, a lot of critics today still say that the movie is far less a scathing political satire that some would like to assert.  It’s really just a comedic spoof on war films that can seem, at times, desperate for a laugh.  I stand kind of in the middle.  I don’t think the movie was as politically bold as other satires of the era (The Great Dictator and Citizen Kane) come to mind, but that doesn’t mean it doesn’t have a powerful satirical grasp on the world.  The Marx brothers themselves were purportedly thrilled to hear that the movie had been banned in Italy after Benito Mussolini saw it and deemed it an open insult on his politics.  Surely, its main joke—the comedic element that flows through the entire film—is its portrayal of a pawn-dictator that rose to power with no ascertainable skill who ultimately sends the world to a pointless war.  (The pointlessness of the war is well-symbolized in the final scene where the Marx Brothers throw fruit at the fallen enemy.  I have wondered if this scene inspired what was supposed to be the final scene of Dr. Strangelove, where all the major characters were to engage in a food fight.  It doesn’t matter, I guess, since that ending was chopped).  This main, underlying joke of the unqualified and accidental dictator is the harsher and more maniacal sister of the same joke as it was used in 1940’s The Great Dictator, and the spiritual progenitor of Woody Allen’s Bananas.

In the end, I don’t think it matters.  If you want political satire, this is a great film for you, but there are plenty of better ones out there.  What is really important is what this movie brings to the table to you, the viewer.  It is probably one of the top five most funny movies ever made, bringing a jollity and humor to our lives even today, at 81 years young.  It rings true and fun to us today.  I am often reminded of another Woody Allen film (one of his finest), Hannah and Her Sisters.  In it, Allen plays the supporting role of a hypochondriac who questions whether life is worth living.  Towards movie’s end, we see him as Duck Soup plays on a movie screen.  We don’t know everything that goes through his head in this scene.  But, we do know that Duck Soup, in its own way, saves him in the end.

I think that’s what makes it so great.  The Marx Brothers—all the satire aside—wanted to make us laugh.  They were the best comedy team ever assembled, so, consequently, they made us laugh a lot.  So don’t get too caught up with the politics, as fun as they are.  For me, the best way to explain what the movie is really about can be taken from Groucho’s own words when asked about the significance of the film’s political stance.  “What significance?” he said, “We were just four Jews trying to get a laugh.”