Of all the screwball/romantic comedies of the 1930s, few stand as tall as It Happened One Night.  When the movie was released to secondary movie houses in 1934 after mixed success with its initial release, it started a popular wave across the United States as people everywhere swarmed theaters to see Clark Gable—“The King of Hollywood”—and silent-film golden girl Claudette Colbert fall in love.  What at first appeared to be a flop turned out to be the biggest success in the history of Columbia Pictures up to that date.

The movie started a new trend in the industry because of this “accidental” success.  Since its surge in popularity occurred late in its theatrical release period (mostly by word of mouth), and, consequently, came closer to Awards season, it became an Oscar contender despite mixed reviews from earlier on in the year.  As matter of fact, Colbert initially refused to attend the ceremony because she thought that she was going to lose.  When it was announced that she actually won, Harry Cohn sent someone to get her.  She was about to leave town on a departing train, but was brought it to the ceremony wearing a two-piece traveling suit.  The movie, originally thought to be a long-shot, felt its recent surge in popularity among the masses push it into victory.  Since then, movies considering themselves to be “Oscar-bait” are released at the end of the year, close to the Awards, realizing the power of recent sales as opposed to successes that were already months old.

As a matter of fact, It Happened One Night didn’t just see success in the Best Actress category.  The movie won all five awards for which it was nominated: Best Picture, Best Director, Best Actor, Best Actress, and Best Screenplay.  These five awards (The “Big 5”) had never been swept by a single film leading up to 1935’s ceremony, and never would again until One Flew Over the Cuckoo’s Nest swept them in 1975.  The feat was repeated only one other time, with The Silence of the Lambs in 1991.  The movie not only allowed Colbert’s career to survive into the sound era, but also establish Gable as Hollywood’s true “King”, securing for him important future roles, including but not limited to, the “role of a lifetime”: Rhett Butler in Gone With the Wind.  Furthermore, the movie was the first in the golden age of Frank Capra pictures.  Before It Happened One Night, Capra was relatively unknown, and none of his pre-1934 films have survived in popular circles.  After It Happened One Night, Capra would become the ultimate king of sentimental/romantic/uplifting films, making Mr. Deeds Goes to Town in 1936, You Can’t Take it With You in 1938, Mr. Smith Goes to Washington in 1939, and Meet John Doe in 1941.  During the war, Capra would help in making propaganda films, making only one Hollywood-style film during that time (1944’s Arsenic and Old Lace).  After the war, his successes would continue with It’s a Wonderful Life in 1946 and State of the Union in 1948.

When we return to the contents of my chapter entitled “The Great American Screenplays Part One: Fast-Witted Masterpieces in the Golden Age of American Talkies”, the reasons behind It Happened One Night‘s success are briefly described.  The film covers every thematic aspect of the screwball archetype.  Rich and poor.  Man and Woman.  Marriage and remarriage.  Farce.  Repartee.  Just listen to the plot and see for yourself (better yet, watch the movie):

The movie starts when Claudette Colbert’s character, Ellie, a rich heiress, jumps ship (literally) in order to be with the man she has recently married, a famous pilot named King Westley.  This supposedly empty infatuation with a pilot would be used in Jean Renoir’s The Rules of the Game five years later, only in reverse.  While we are wrong to assume the infatuation to be empty, we are at least a little justified to question the true quality of the love, because, as the movie goes on, she ends up falling for Clark Gable’s Peter Warne.  Much like Rhett Butler in Gone With the Wind, a role Gable would play five years later, Warne is a self-confident man who can’t help but flirt with spoiled heiress while, at the same time, exuding his own form of aloofness.  He is a character removed from emotion, at least until movie’s end.  Ellie, on the other hand, is a character almost too attached to emotion.  They are polar opposites, and yet, they are brought together as Peter travels alongside Ellie as a financier on her way to find Westley.

The concept of role reversal becomes key here.  Where Ellie has lived her life as the rich girl, and Peter the lower-middle class working man, we now see them in a rather controversial switch: because she has run away on a whim, she has no money.  Peter has a little, and it’s a “little” that he’s willing to spend because he sees it as an investment.  See, Peter is a newspaper beat-writer, and Ellie’s marriage and subsequent flight from her domineering father has created quite the scandal.  He’s going to be the man with the inside scoop.  It’s the story that’ll make a career.  This could be one reason why he tries to remain emotionally aloof: he wants Ellie to end up with Westley for the most part.

Yet, there is this perpetual atmosphere of flirtatiousness.  There is one sequence in particular where Gable helps button up Colbert’s blouse.  There is also the ruse they pull in order to save money where they pretend they’re married and share the same room.  There’s the famous “Wall of Jericho”, a feeble blanket held up by a wire to allow them some “privacy.”  Gable constants flirts with Ellie, who is at first incredibly resistant.  Later on, however, we see her lighten up in her own way, allowing a little bit of sensual flirting herself as she decides to hitchhike by exposing her legs on the side of the road.  (Supposedly, Colbert refused to do this scene as it was terribly un-ladylike.  After the body double failed to impress Colbert—“those aren’t going to be my legs!”—she consented to do the scene). 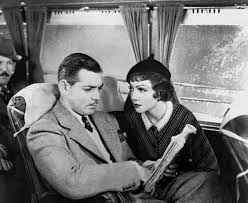 Peter’s seemingly contradictory behavior—trying to get Ellie into Westley’s arms while trying to get Ellie into his own—can only be reconciled through the realization that Peter can’t help himself.  He’s an extortionist, a poor-man’s playboy, a newspaper man.  This activity in the lives of others is in his blood.  The symbology of the newspaper man in Depression-era American and his associated motives was incredibly potent and has a special power that belongs on stage.  Robert Riskin, the man who wrote It Happened One Night (and won one of those Big-5 Academy Awards doing so), was just the playwright to do it.

The film’s approach to courtship was edgy considering the fact that it was made by the ultimate feel-good family-friendly director.  But, there was something really good about it.  It was edgy because it followed a man and a woman traveling alone together across the country.  But, traveling across the country together was the probably the most important symbol in the entire movie. Riskin and Capra used travel as a plot device in much the same way that Homer did, but combined it with Taming of the Shrew.  You see, the movie follows Peter and Ellie as they scrounge for rides on buses, trains, and automobiles (even hitchhiking), to get Ellie back to King Westley.  In the process, they cross an American landscape that is rich and alive with the personality of the era.  They cross the country, falling in love in the process.

Not only did this play on Homer’s famous Odyssian plot device, it went on to redefine said device in a new artistic climate.  After It Happened One Night, the idea of the “travel flick” would become a significant trend, particularly in comedies.  I don’t think that all the travelogue-type films that would follow intentionally copied the adventures of Peter and Ellie, nor do I think they all played out as some sort of conscientious homage.  I do, however, think that they—like It Happened One Night—helped to realize the true magnitude of this symbolism of travel.  Life is a journey, and the stops along the way act as landmarks that help to define it.  Our lives are made unique by the stops we choose to take and the time we choose to spend there.  Movies like It Happened One Night help us see that these stops along the way are best spent with someone at your side.  That is when paths begin to cross, overlap, and ultimately join to become one.

In Depression-era America, a lot of people’s paths were coming together, whether they liked it or not, as the freedom to be truly unique slipped away in favor of a need to find food and struggle through the tough times.  That’s the way life is sometimes.  Sometimes, we find our path being chosen for us.  Maybe that can be for the best.  For Peter and Ellie, it turned out to be exactly what they needed.  In It Happened One Night, America the place—the land, the roads, the places, the people—became the set.  The drama didn’t unfold in a cramped room, a castle, a conference, a space ship, or whatever.  The drama occurs in America.  Their life and love is the American life and love; not so much in the patriotic sense as in the social one.  In this regard, the movie acts as a homage to the land itself.  Like the river in Apocalypse Now or Aguirre: The Wrath of God, the roads of America act as the connecting points not only between places, but also people, ideas, and emotions.  It is the life-blood of the entire picture. 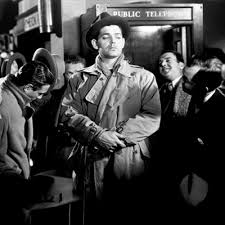 The movie reminds me a lot of the lyrics to Simon and Garfunkel’s America:

Let us be lovers,
We’ll marry our fortunes together.
I’ve got some real estate
Here in my bag.

So we bought a pack of cigarettes,
And Mrs. Wagner’s pies,
And walked off
To look for America.
“Kathy”, I said,
As we boarded a Greyhound in Pittsburgh,
Michigan seems like a dream to me now.

It took me four days
To hitch-hike from Saginaw.
“I’ve come to look for America.”

Laughing on the bus,
Playing games with the faces,
She said the man in the gabardine suit
Was a spy.

I said, “Be careful,
His bow tie is really a camera.”
“Toss me a cigarette,
I think there’s one in my raincoat.”
We smoked the last one
An hour ago.

So I looked at the scenery,
She read her magazine;
And the moon rose over an open field.
“Kathy, I’m lost”, I said,
Though I know she was sleeping.
“I’m empty and aching and
I don’t know why.”

It was.  And it remains, to this day, one of the finest in its genre.