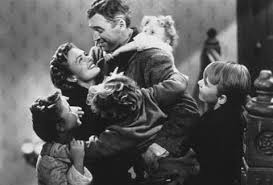 The holiday season doesn’t stop at Christmas.  It continues on through New Year’s Day…at least in our neck of the woods.  And, when it comes to New Year’s movies, there is none better than the great Frank Capra’s masterpiece, It’s a Wonderful Life.

I’ve long noticed that it is more fitting to see this movie as America’s greatest New Year’s film than a Christmas one.  Christmas is a religious season: it is a season about forgetting yourself and serving others in the name of the higher spirit that we remember during the holiday.  The celebration of the New Year is actually quite the opposite: it is a season of personal rebirth, one of self-analysis, reflection and goal-setting.  It is the most introspective of all the holidays, and the most self-conscious.

It’s a Wonderful Life isn’t about learning how to give.  It isn’t about someone learning the spirit of the season.  It isn’t about the themes and the gift-giving and the carols.  It’s all about a man who already has learned all these things.  And the movie’s foundational carol?  It’s not “Silent Night” or “White Christmas”.  It’s “Auld Lang Syne”.

Stewart plays George Bailey, one of those few film characters whose name most people readily recognize.  George is the man who has lived an entire life of self-sacrifice only to see all that all that altruism is starting to seem worthless and foolish.  We see him begin to doubt the worth of his entire existence.  We see him drive himself to suicide.  What is interesting about this spiral is that it is so insightful into the torrential cycle of depression.  So often people are driven to melancholy because they see their dreams slip away, and this lack of self-fulfillment makes them feel pointless.  For George, his dreams were to go to college, become an architect, and travel the world.  For his young mind, this was what life was all about.  To not experience these things was to never achieve actualization.  He reaches a point when everything falls apart, and when everything falls apart, he seems himself for what he is (at least what he thinks he is at the time): nothing. 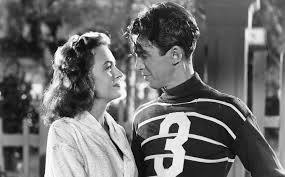 A while ago, I read a blog post from a woman who said that she disrespected women who chose to be wives, mothers, and homemakers instead of choosing to live a full, complete life.  She went on to cite examples from her own life as evidence to what a full, complete life is.  Included in this list of examples was her recent trip to another continent, her current career, and other things that help us to see that no one in the 100,000 year history of humanity leading up to the advent of the airplane lived an actually complete life.  Regardless of my opinion on this post, it says something very powerful to me about the contemporary American: we, far too often, choose to define our lives by what we have accomplished.  Whatever happened to devoting one’s life to someone else?  Whatever happened to focusing our efforts on other people (not for the duration of a three-month peace corps trip in Ghana, but for the duration of an entire lifetime within the walls of our own houses)?  Since when have we started to glorify a life devoid of self-interest?

What It’s a Wonderful Life tries to teach us is that when we are most focused on the welfare of others we are most likely to feel fulfilled.  George Bailey realizes that his life (devoid of the career and the trip to another continent), is as full as any life that could be lived.  Helping him to realize this is his guardian angel, Clarence (played by Henry Travers).  Clarence is a wingless cherub, who hopes that, by saving this good man, he can finally get his wings.  And get his wings he does, at the sound of the bell that waves from side to side on George’s own Christmas tree.  “Every time a bell rings.”

Clarence is the Ghost of Christmases that Could Have Been, as opposed to those past, present and Yet to Come.  He shows George what life would have been like in the little town of Bedford Falls had George never been born.  George sees all the good he has done for every soul in the city that he has touched.  But most of all, George comes to realize how much they have touched him.

What George (and his father before him) come to symbolize in the town of Bedford Falls is the type of American virtue that the screenplays of the 1930s and ’40s—particularly those of the Frank Capra films—tended to exalt.  It tends to glorify the working man, even the wealthy man, but only on the condition that said wealthy man gives himself to the poor around him.  The film is a political manifestation of the Gospel of Wealth as stated by Andrew Carnegie, a gospel that seemed greatly vindicated after the collapse of the banks in the Great Depression (a collapse that is hinted at slightly in the story of It’s a Wonderful Life) and was firm in the minds of the American populace after that Depression led to a world war. 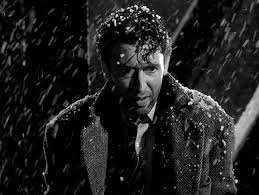 This idea of affordable housing projects, forgivable loans, and getting to heaven didn’t stand well with some in Washington, who thought that it seemed a little too much like the sort of West Coast socialism that was promulgated by William Randolph Hearst and Hollywood.  Some, (including Ayn Rand, according to rumor) investigated it for communist undertones during the Red Scare.  What allowed it to survive, in my opinion, was the fact that it was not Communist at all: it was as American as anything ever was.

Carnegie’s Gospel of Wealth was not about creating a government where the wealth were neutered.  It was about letting a good man like George Bailey get wealthy on his own merits, work hard, and contribute on his own accord to the betterment of his fellow man.  What It’s a Wonderful Life asks the American worker to do is not to rise up in protest against the Mr. Potters and Ebenezer Scrooges of the world; it asks us to try a little harder to make a society of helpers.

The story and its morals were unlike anything that Frank Capra had made up to this point.  His career was made up of movies like It Happened One Night, Mr. Smith Goes to Washington, and You Can’t Take it With You.  He, even by 1930s standards, had a reputation of being a sentimental director…THE feel-good director of cinema.  But, then came the war.  Then came a hurdling series of questions that the citizens of the world could not seem to answer.  Then came the darkness of death, economic toil, broken families, and fear.  If there was a story to tell after that war, it was It’s a Wonderful Life.

Of all Capra’s “feel-good” films, It’s a Wonderful Life is his darkest.  We watch the darkness envelope George Bailey as the movie progresses.  Look at the shadows that cross his face as he approaches that bridge.  The snow will not lighten, or whiten, this scene.  This is why I have to agree with James Stewart’s own analysis of the colorized version of the film: “it made me feel sick.”  The use of light is superb, but the use of darkness is even better.  This was a sentimental film for a new, bleaker period in American cinema.

Just like for the Western in 1948, the comedy-drama of American film was forever changed after It’s a Wonderful Life in 1946.  For people like Capra, the man partially responsible for this change, he was unable to keep up.  Other than good relative handling of 1948’s State of the Union, It’s a Wonderful Life was Capra’s last real success.  But, for James Stewart, this movie brought on a new stage of his career.

Perhaps Stewart’s war experience changed him, but this role of George Bailey was made for the new Stewart, who had been the every-man that everybody loved in the 1930s and early ’40s.  But, after the 1940s, Stewart would shred the everyman role, paving the way for such darker roles as those in movies like The Naked Spur, Winchester ’73, Rope, and Vertigo.

This idea of moving into a new era of film parallels very closely the point that I brought up at the beginning of this review.  In particular, I am referencing the idea that this movie is a movie about change, moving from one era to another, and learning—through self-reflection—about how we can grow and improve as individuals.  These are the themes that make It’s a Wonderful Life a New Year’s movie just as much as it is a Christmas movie.

We watch as George Bailey establishes from the film’s outset that he is going to grow up to travel the world and “build things.”  We then watch as he, one decision at a time, forsakes this dream.  But have you ever stopped to think about when he makes these decisions?  They are all made at some sort of life milestone.  His decision to save his father’s business after his father’s death happens at a graduation.  His decision to drop his travel plans and give up his savings to curb a run at the bank happens at a wedding.  These are just a couple examples.  At every stage in his maturation, George makes a decision that keeps him right where he is, and makes the world around him a better place.  Never has a stagnant, suburban life been so glorified.  It remains one of the great ironies of film history that a film once decried as Communist propaganda is now decried by progressives everywhere.  All those “decriers” are missing the beautiful point.

For George, the beautiful point is very simple: “Remember, no man is a failure who has friends.”

With this in mind, the words of the famous New Year’s carol, the words that end It’s a Wonderful Life, are brought to new life:

And surely you’ll buy your pint-cup!
and surely I’ll buy mine!
And we’ll take a cup o’ kindness yet,
for auld lang syne.

And there’s a hand, my trusty friend!
and give a hand o’ thine!
And we’ll take a right good-will draught,
for auld lang syne.