Perhaps no other line in La Règle du jeu (The Rules of the Game) acts as a fairer summation of the movie’s plots and themes as this one, spoken by Octave, the intervening old man in a complex game of youth, love, and social impetus.  It is only fitting, in a meta-filmic sort of way, that Octave is played by the film’s writer, producer, and director, the man that most would consider the greatest of all French auteurs: Jean Renoir.  It’s like the author’s own film commentary, nestled into the screenplay itself, cozily and conveniently.

Because of this movie’s presiding role within the film pantheon, and because of its incredible similarity to Kane (at least, in the way that I relate to it on a personal level), The Rules of the Game deserves similar treatment to that which I gave Welles’ masterpiece.  You may recall that—wow—over two years ago, I wrote a series of essays on Citizen Kane, each focusing on different themes, stories, and filmmaking elements within and around that movie.  Following an introduction, I wrote articles on the behind-the-scenes story of the making of Kane, its political and controversial history, its value as a character study, its impeccability as a comedy, and its profound technical achievements.

There are just as many amazing elements that give life—even immortality—to The Rules of the Game.  It, like Kane, is an auteur picture.  It is a technical masterpiece, even employing many of the same techniques as deep-focus and montage.  It is simultaneously a heart-breaking melodrama and a robust comedy of errors.  It is an allegory for cultural destruction ripped from what could be the very fabric of real life.  It is also a lighthearted satire of the haute bourgeoisie.  It is simultaneously realist and poetic.  It is, with all its layers and complexes, the apotheosis of French Poetic Realism, with a lightness that divorces it somewhat from the movement’s general atmosphere of melancholy.  Facing the imminence of the second World War, it is a film with profound depth and sorrow, yet decidedly rebellious in its refusal to succumb to such apprehension.

Like my long and devoted relationship to Citizen Kane, I came upon this understanding of The Rules of the Game slowly.

I first saw it the summer after my sophomore year in college.  This was the same summer that I would give Citizen Kane the most important second chance I gave a movie, when I would end up watching it five times in about one week.  I didn’t watch The Rules of the Game that many times.  I only watched it once that summer.  I thought it was good, don’t get me wrong.  But I did find it a little overblown.  I could tell that it was funny, but I wasn’t watching it as a comedy, so a lot of the nuanced stuff escaped me.  Instead, it seemed like a melodramatic thoroughfare of hype and arrogance, full of characters that I didn’t like and ramp with unneeded bombast.  For me, my thought was, “I get it.  The upper class are prudish, lustful, and deceitful, and that’s a bad thing because people get hurt.”

Something happened, though, only a month or so later, something that, for me, proves the utility of lists and countdowns.  In a surprising turn of events, on August 1, 2012, the prestigious Sight & Sound critic’s poll was released.  Citizen Kane‘s long-held pole position had been toppled in a tremendous coup by Alfred Hitchcock’s Vertigo. This was a significant turn of events in film criticism.  Immediately, cinéastes around the world, as well as up-and-comers like myself, were studying the poll.  With Vertigo and Kane taking up spots one and two, respectively, the top five was rounded out by Tokyo Story, The Rules of the Game, and Sunrise: A Song of Two Humans.

I then started looking more into the history of the poll itself.  In 1952, The Rules of the Game ranked 10th in the poll (which was staggering considering the fact that the movie was never released completely and without censorship until 1956, more on that later).  In ’62, it was ranked third, behind Citizen Kane and the new arthouse-darling L’Avventura.  In ’72, it was second, behind Kane.  These two films would keep that position from ’72 all the way to ’92.  It wasn’t until the new millennium when critics decided to insert Vertigo at the second spot, one ahead of Renoir’s masterpiece.

I had always known that The Rules of the Game had a perennial spot in the critical conversation of “greatest film of all time.”  It wasn’t until August of 2012, though, that it hit me just how substantial a seat it had at the table.

I re-watched it later that year.  I had moved apartments, was dating the girl that would eventually become my wife, and was getting more and more into the philosophies of Andrew Sarris and “auteur theory.”  After watching Renoir’s The River and his short-masterpiece Partie de campagne, I decided to look, again, into The Rules of the Game.  This time, I could see why so many critics loved it.  It was so thought-provoking.  I had to stop and rewind a couple times, because I didn’t want to miss a line.  I wanted to give it a good viewing, an analytical viewing, one where I knew exactly what each character’s name was, what they were doing, and why.  That way, I thought, I would understand the premise a little more thoroughly, and, by extension, get the satire.  It worked.

It was only after watching La Bête Humaine and Renoir’s Trilogy of Spectacle while living in Houston, Texas that I came to a realization that Renoir was a master of genres.  He could make a dark pre-noir film like La Bête Humaine and then produce the lavish and elegant romantic comedies/adventures that make up the later Technicolor films of this famous trilogy.  Around that time, I got the Criterion Collection Blu-Ray release of the The Rules of the Game for Christmas.  I was only able to re-watch the first twenty minutes in those weeks before the new year, but I was also able to watch a bit of the audio commentary and read the essays that accompanied the release.  Watching Renoir’s other films and getting this exposure to the Blu-Ray release was vital to my appreciation for the film.  I never realized the complex and interesting story that accompanied the film’s release.  (Again, more on that later).  The movie became, to me, a masterwork of genre manipulation, a tribute to French literature, and a perfect film for its time.  This historical element spoke deeply to me.

My most recent viewing was on the other side of the country, in my new home in Lexington, Virginia.  My wife and I watched the film one weekend, when I was home from my summer job in another state.  I’ve never been a huge fan of Blu-Ray when it comes to modern films, because so much of modern cinema is blurry and the shot-lengths are so short.  The high-definition, can, at times, only make this blurriness and speed more obvious.  But, Blu-Ray was made for older movies.  In particular, Blu-Ray was made for deep-focus.  Watching the Criterion Collection release of The Rules of the Game was an experience in pristine pictures and elaborate set-pieces.  I couldn’t believe how a film about a weekend hunting party, with little action, no color, and a lot of talking, could be such a monument of optical pageantry, a true visual extravaganza.  I was amazed at the elaborate use of the moving—“floating”—camera, and how deep-focus was used to show so much action going on in the background of the shot.  Renoir was able to make a two-hour movie with enough characters and plots and relationships to fill up a four-hour movie because he was able to record multiple stories at once.  With deep-focus, stories are playing out in the front-, middle-, and backgrounds at the same time, and it is a treat to watch them unfold from the audience viewpoint.  That in and of itself is reason enough for the film to merit multiple viewings. 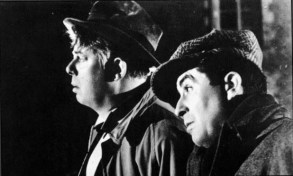 But, perhaps the best reason why this film merits multiple viewings is because it, like Kane, is so nuanced that every time you watch it feels like a new experience.  One day, maybe, I’ll be able to watch The Rules of the Game and feel that overwhelming sensation of all of those layers coming together at once, being filled with a sort of elating triumph at full comprehension.  That time, it seems, has not yet come.  But, that’s okay.  In retrospect, I can take a composite of all these viewings, all this study, and all these experiences.  That composite is a cumulative masterpiece of storytelling, filmmaking, acting, choreography, photography, and set direction.  In essence, it is a masterpiece of art in all its forms.

So, join me if you will on another essay series analyzing and reviewing the magnificence of Jean Renoir’s chef-d’œuvre, The Rules of the Game.

Please follow the links provided to navigate this series on The Rules of the Game: