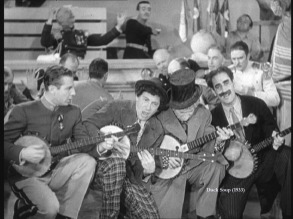 One year before It Happened One Night shifted the gaze of the 1930s comedy towards romance, creating a genre that would shape American cinema for decades and decades to come, a group of writers and performers were capitalizing on the screwball comedy in its purest form, full of wit and satire and slapstick.  Speed of delivery, incoherence of plot, and satirical approaches to class and politics became the hallmark of what this blog has called (in the “My Take On…Comedy” chapter) the “anecdotal” comedy.  This subgenre of comedy (made up for this blog) is the sister genre to screwball, taking slapstick to new extremes while approaching its storyline with an anecdotal approach; what resulted from such an approach was a film that played out more as a compilation of sketches than a story in the conventional sense.  While this type of comedy would survive into the 1940s with the Marx Brothers, Charlie Chaplin, Abbot and Costello, Laurel and Hardy, and W.C. Fields (and would continue beyond the 40s in gimmicky novelty films like Airplane! and the Monty Python movies), the ultimate anecdotal-screwball comedy was released in 1933.  It was the crème de la crème of all the Marx Brothers films—the most funny, the most political, the most daring, the most memorable—Duck Soup. END_OF_DOCUMENT_TOKEN_TO_BE_REPLACED