The Road Home is Yimou Zhang’s sweetest film.  It introduced another person with the Zhang surname (as far as I’m aware, they are not related), the beautiful and talented Ziyi Zhang.  Ziyi Zhang might be the most recognized Chinese actress in the world, with such roles as those in The Grandmaster, Crouching Tiger, Hidden Dragon, House of Flying Daggers, and Memoirs of a Geisha under her belt.  But, her role in this movie will always be my favorite of hers.  It is Ziyi Zhang at her youngest, playing a child caught up in childish things.

She is a teenage beauty named Zhao from a small Chinese village, who is instantly caught up in an unwavering love for the new village stranger, a young teacher from the big city who has come to start a new school there.  We watch her love move from one requital to one of mutuality, and we watch as both characters make real sacrifices to tell what is one of the best love stories in the history of cinema.  We actually watch all this unfold in the manner of one drawn out flashback.  Not unlike The Wizard of Oz, the story begins in a black and white world, a darker world.  That “real time” is actually shown in black and white is quite telling here.  We see Zhao’s son, years later, as he goes to his mother to mourn the passing of his father, the same man we will later get to know as the teacher in the flashback.  When the son begins to tell the story of his parents’ fairy tale, we are taken into a world of color.  Like Oz, this is a world of magic.  The magic in this world is “sympathetic”, a type of magic that I explained in my case study introduction to this section of reviews.

In most societies, the marriage is seen as a “disruptive ceremony” that places newness and variance in the established lifestyle of the person being married (or disturbed).  Disruptive ceremonies are the key aspect of human development within an anthropological framework and are often accompanied with a ritual form of rite of passage.  If that ritual is not present, then the rite of passage is, instead, implied.  The film, The Road Home, does not deal with a marriage, but rather that which precludes a marriage (at least in Western societies): courtship.  While no official ritual is present, the rite of passage is still implied, mostly as a liminal—or educative—stage that prepares the individual for further cultural, societal, and human advancement.  The interesting facet of this film is that it is Chinese, and in said culture, adherence to Western marriage and courtship procedures is non-extant.  Perhaps by showing this revolutionary-like courtship (it was the first time in the known history of the village that two people had picked whom they desired to marry), Yimou Zhang was able to portray a continuity of laws of magic—such unexplainable phenomena as love and obsession—which overwhelms even the most stringent cultural roles and relationships.

When Zhao begins her attempt to woo the school teacher, she is almost immediately forced into a difficult and dreadful situation.  Just like the scene from Red Sorghum, also directed by Zhang, wherein the main character is “bounced” on the road to her new husband’s home—a direct symbol of this very nature of “disruptive ceremony”—Zhao is deeply shaken, this time internally.  The schoolteacher is taken to Beijing for questioning; perhaps due to something he said that was construed negatively by the leaders of the Communist Revolution in that nation.  The separation that ensues is physically, emotionally, and mentally draining on Zhao, and her ability to outlast it and keep firm faith prepared her later for her role as wife and mother.  This was her liminal stage.

The love that motivated this behavior (and brought about this rite of passage) spawned from another strictly human phenomenon known as laws of contagion.  Three objects are important in this case: the bowl which she used to give food to the schoolteacher during the construction of the school, the barrette that the schoolteacher gave her to remember him by, and the road by which the schoolteacher came into the village.  There are other objects (such as dumplings, jackets, and the schoolhouse itself) but these are very important.  These objects, insofar as the characters are concerned, carry an “essence” of the other party, and are therefore manifestations of that person in the life of the other: something by which to remember them, something to treasure above all other possessions, and something to hold on to as a symbol of the mutual bind.  When the bowl was broken, it was a symbol to Zhao that the essence of the schoolteacher was really gone from her life.  When the bowl was later repaired, however, it brought added symbolic hope.  The same thing happened with the barrette.  Once it was lost, and then it was found again.  The road is the most important, and possibly overlooked, of these enchanted objects. 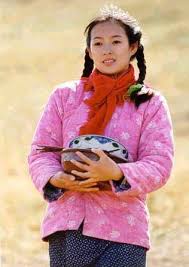 The way that Zhang decides to focus so much of his screen time on these images of real-world objects show how he understands the sentimentality that certain items can have.  I think about my mom, who plants peonies and jankmanii clematis in her backyard because each one reminds her of her grandmothers.  She collects rocks and seashells from everywhere she visits.  She keeps leaves and flower petals between the pages of books with little notes about where they came from and who gave them to her.  Zhang has the same reverence for objects, the same understanding that even though they have no real magic or feeling, they still carry with them the same essence of their source.  Watch how one of the most important scenes, artistically, in the film shows an old man who delicately pieces together the fragments of a broken bowl, the very bowl that Zhao used to feed the man she loved.  We have already seen how devastated she is when that bowl breaks.  Now, we get to see the symbol of its rebirth.  Then again, watch the scene, filmed so beautifully, of that moment when Zhao goes to the abandoned school building, cleaning it and decorating for no one’s eyes but her own.

Remember what I said at the end of my review of To Live?  Living, really living, according to Zhang, is how we choose to leave our essence in things, places, and people that matter most.  It’s the most spiritual of all forms of materialism.  This is the “road home.”  At the movie’s end, when young Zhao, now an old woman, goes back to that village to mourn her husband’s passing, she wails that he is gone forever, and that she will never see him again.  This is not a reference so much to Chinese belief patterns or their cosmology of eternity.  Rather, this is the most humanist part of the whole story.  It is the most honest part, because it shows those feelings, whether fleeting or permanent, that we all get when faced with death.  But, when her tears pass, the realization comes.  He lives on.  He is still with her, in that road, in that old schoolhouse.  And in her son.