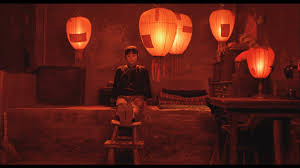 This is a movie with a simple plot, if you can call it a “plot”.  It’s more of an examination, a look-in on the life of an interesting and sad character.  This is a movie about a woman named Songlian, who is sent to an early twentieth-century harem to be a concubine to the rich landlord.  It’s simple enough.  There’s no real plot in terms of beginning, middle, and end.  It is mostly a documentary of her life—and her decline—as she struggles with the hostility of such an objectified existence.

Yimou Zhang’s Raise the Red Lantern was named the greatest Asian film ever made by an audience poll by MovieMail in the year 2000.  Now, I don’t agree that it is the greatest Asian film ever made.  It, in no way, outdoes the great Japanese films of Ozu, Mizoguchi, and Kurosawa.  But, it is certainly the best Chinese film ever made.  I think that the movie was thus bestowed by MovieMail mostly because of its bold feminist messages, as well as its commentary on society that not only involves Chinese tradition but also can be permeated to other nations and peoples.  I, and the rest of the international circle of film connoisseurs who have seen the film, know that the messages and ideas that are put forward in this film apply equally to America and Argentina, Russia and Rwanda, Britain and Brazil just as well as they apply to China and its neighbors.

I think that this is the beauty that you get when a director unapologetically embraces his culture.  While he is undeniably commenting (in a rather scathing manner) on the treatment of women in his nation’s history, you’ll notice that he does not use any conventions or storytelling devices that you would find in other nations.  He does not find it necessary to speed up the plot, or introduce new characters.  You also see this in his other films, like To Live, The Road Home, and Riding Alone for Thousands of Miles.  He does not, for one moment, try to be anything other than who he is.  He is Chinese, and, regardless of their history or weaknesses, he is proud of it.  Does he recognize those weaknesses?  Yes.  Does he try to comment on them, encourage his people to move past them to a better future?  Absolutely.  Raise the Red Lantern is the best example of this.  BUT…he doesn’t stop respecting where he came from.

I think there are things that American movie-makers can learn from this.  We are so caught up in political correctness and cultural shame (WASP-y guilt) that we try to abandon our culture.  It’s the hipster in us to try to be, say, Asian, in our approach.  What people like China’s Zhang, or India’s Deepa Mehta, show us is that you can love the land wherein you live and still produce a harsh criticism of it.  We tend to be forgiving towards our characters (something I discuss in my page on morality in films), yet we are absolutely unyielding in our refusal to forgive our cultures.  Zhang’s film is harsh, sad, and lonely.  It is a stark rebuke of sexism in his nation.  And yet, it is passionately filled with reverence toward the land and culture.

Zhang filmed a lot of the film with an emphasis on color and on distance: the characters are often seen with a stationary camera from a distance (the master of the home is always filmed from so far away he is not ever seen in real detail.)  His use of close-ups, therefore, are particularly telling, bringing the audience, who as of yet has acted solely as distant observers, into the literal heart of the characters involved, particularly the character Songlian, who was played magnificently by famous Chinese actress Li Gong.  It is in these moments of intimacy that Zhang proves the Bergman-ian precept: the face was made to be filmed, and the camera was made to film it.  What Zhang provides is a movie that is focused on the person, not so much the plot.  The way the film ends—it ends abruptly—testifies to the point that the movie is focused on people and not story.  The story is an accessory whereby a deeper story can be told.

In regards to the deeper story, Zhang provides an intimate account of the anthropological.  The focus of the cultural analysis is on the structure of the Chinese family.  Today, these brothel-style households of concubines and sister-wives are not as prevalent, however the familial hierarchies and familial relationships that are highlighted therein are still extant.  As I discussed in my introduction to this case study of Zhang’s films, the Chinese family structure is very strict, and that strictness plays out divisively in this film.

In Raise the Red Lantern, this sororal polygyny is not much more than a fictive kinship based on the familial structures that have come to, and still continue to, dominate Chinese kinship and family.  This is the deep story riddled with deep questions that Yimou Zhang has chosen to tell and to ask in Raise the Red Lantern: he challenges the concepts of discrimination in the family that carry into society, he looks into the character of the innocent victim who is driven mad from this structure, and asks how best to overcome it—individuality, which one would think is the answer, seems not to work in this instance.

In all, Raise the Red Lantern is my very favorite film from China.  It is a great commentary on Chinese families, which are the basic unit of Chinese society—the cell in the societal organism, as it were.  Study of this, as well as its impact on the pieces (the people) which make it up, informs sociological studies of the society as a whole.

Deliberate pacing, toxic dialogue, haunting images, and a fantastic ensemble of acting talent coalesce in this film to give us a veritable masterpiece.  These facts alone give us a superb film.  But, throw in the added light we have gleaned from this case study on the films of Yimou Zhang, we come to an even greater appreciation for his brilliance.