The second season of Marvel’s Agents of S.H.I.E.L.D. was really good.  The producers and writers learned from their mistakes in the first season.  Unfortunately, less people tuned in to see it, disheartened by the lackluster first few episodes of this promising series.  At the end of this post last year, I said the only thing that Marvel had left to do was get more people to watch it the next season.  Well, I guess that happened, because the third season was a critical success and a fourth season has been slated.

What mistakes did they make right in this season?  Well, first, they fixed the comedy.  The script in the first season was great from top to bottom; the problem was that they had the wrong characters delivering the lines.  No longer is Skye playing the “comic relief” role; as a matter of fact, there is no comic relief in the series anymore (except for Patton Oswalt, whose comedic timing is, admittedly, uncanny).  Despite that, the series continues to be funny and witty, with perhaps the best comedy played out by the newest additions to the show.  Included in this new addition is comic-book super-spy Mockingbird—who married Hawkeye in the comic books—who only goes by “Bobbi” in the show (it is not common in the MCU for characters to go by their superhero names).  The series also included real comic book characters like Lance Hunter (first introduced in 1977) and “Mack” McKenzie (first introduced in 1988). 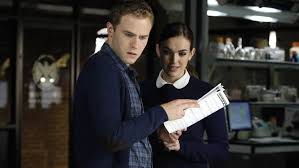 Additionally, we are introduced to some other new characters.  Some of these characters may be fleeting, but their entire inclusion shows that Marvel is more concerned about giving us a contemporary equivalent to the old weeklies than they are giving us permanent storylines that all lead up to one final battle that ends the story as we know it.  For example, we see “Crusher” Creel (who, as we will learn from another entry in the MCU, is the boxer that Jack Murdock beat just before he incurred the wrath of The Fixer).  Creel is the “Absorbing Man”, who was first introduced in the comics in 1965.  We also see Angar the Screamer, who was first introduced in Daredevil in 1973.

On top of that, even, we got our first understanding of the magic of the Terrigen mist and the Inhumans…tying the working of S.H.I.E.L.D. in with Guardians of the Galaxy and laying the groundwork for the upcoming (or is it?) Inhumans movie. 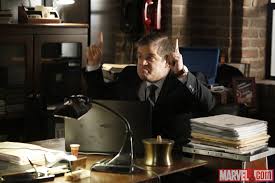 What Marvel’s Agents of S.H.I.E.L.D.‘s second season brought us was the realization, I think, of Marvel’s ultimate goal with creating live-action television series.  They had finally figured out how to do what Stan Lee was doing every week for years when people like my dad would ride their bikes to 7-11 with paper route money and buy up the latest issues of the Marvel comic books.  We had been given a fun, exciting spy show that was more a continuous story than a procedural, with well-delivered jokes and characters who we were finally getting to understand and appreciate.  At last, we had chemistry between the actors, and we felt a story that actually has some real stakes.