My relationship with this chapter in the Marvel Cinematic Universe is not unlike the relationship that we all go through, with all art (movies or otherwise), the more we are exposed to it.  A movie can inspire awe in you, stick with you, and beckon you to watch it again.  That is, until you begin to watch more and more movies.  Then, you start to realize that maybe you misjudged that first one.  This is not a bad thing.  You have traded a single star for an entire universe of film, all without really losing the star at all.  And, if I do say so myself, “universe” is a good word to use here.

Agents of S.H.I.E.L.D. has improved with every season.  This is a wonderful feat.  This realization, however, kind of brings you (or rather “me”) down to earth…you (or rather “I”) start to understand that maybe the first two seasons were ranked a little too high last time, and that, in the bigger picture, a more conservative ranking may be more accurate.

Again, this is just like the comics.  The comics weren’t designed with some end story in mind where all the characters get together in one big collaborative adventure.  They were, instead, a series of different stories about different people who happen to exist in the same universe.  The Marvel Cinematic Universe is a re-hashing of the Marvel Comic-Book Universe that once was.  I’m afraid that the movies have spoiled us, or at least misled us, in that regard.  The ultimate goal here is not to give us a lead-up to some moment when everybody gets together like a bunch of musicians seeing “We Are the World.”  The ultimate goal is for everyone to find that character that they love the most and absorb themselves in a universe full of fun stories.  I think this is most shown in the fact that it was Ant-Man, not Avengers: Age of Ultron that acted as the final chapter in Marvel’s “Phase Two.” The idea here is one of perpetuation, not conclusion.

I think that the real end game for Marvel/Disney is their television shows.  After all, Marvel would, like all comic-book producers, come out with large-issue graphic novels every now and again, but the real heart and soul of their comic universe lay in their weekly issues.  Every week, you’d get a new Silver Surfer adventure, a new X-Men battle, a new Spider-man caper, or a new team-up with Iron Fist and Power Man in order to take down some ninja criminal threat.  Every couple of weeks, a new Avengers issue would come out…one week, Thor would be there, the next, he’d be replaced by the Human Torch or Ant-Man.  It was in these weekly issues that their true fans found their greatest joy.

Now, I’m not saying Marvel doesn’t want to make movies.  Absolutely not.  That’s the heart and soul of this new rehashing of the Marvel universe.  What I’m saying, though, is that Marvel likes their TV niche, and I think they want to keep it that way. 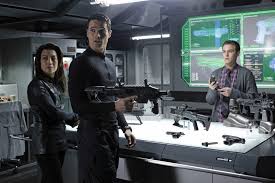 It took them a while, though, to figure out how to pull it off.  This is why the first season of their first effort at television supremacy is so low on this list.  In all honesty, the first several episodes of the first season of Marvel’s Agents of S.H.I.E.L.D. were so, so, so dreadfully bad that I am shocked (and yet, rather proud) that I was able to survive them and stick through to that point when the episodes starting getting good.

The biggest problem with those first few episodes is the same problem that exists in so many television shows: it takes a while for us to establish characters and dynamics that will survive.  Every TV show struggles to get these things established in the first few episodes.  (Except for The Sopranos, but there can only be room for one at the top).  The issue with Agents of S.H.I.E.L.D. is that it was so dreadfully bad in those first few episodes that it seemed almost irreparable.  I think that is why it had huge troves tune in for the series premiere, only to find a drastically smaller tune in for the second season premier.

But, eventually, they figured it out.  First, they ditched the procedural-type element of the show, where every week they’d be facing a new alien or super-tech threat only to forget about it in weeks to come, replacing it instead with a more continuous approach with story arcs that stretched multiple episodes.  Eventually, we would begin to see story arcs that span entire seasons and more.  And, ultimately, that worked.  What happens with procedural shows is that characters remain unchanged.  The stories are so short that they leave no lasting impact on the characters, nor do they give us any added light and depth into those characters.  When given overarching concepts, we get to see more conflict between characters, more stock in the threats to come, and more satisfaction when story lines are nicely tied.

What started out as a doomed trainwreck turned into an enjoyable experience where we follow Phil Coulson and his team (Grant Ward, Melinda May, Skye, and the scene-stealing pair of Fitz and Simmons) as they live a parallel life to the Avengers, even coming into contact with such movie characters as Lady Sif, Maria Hill, and Nick Fury.  I was even able to forgive Marvel for what I deemed the biggest narrative mistake of the MCU: resurrecting Phil Coulson after his death in The Avengers.