One of my biggest issues with Batman v. Superman: Dawn of Justice was exemplified in something that occurred toward film’s end, when Batman storms through a building on the waterfront to save Superman’s adopted mother from certain death.  As he cradles her in his arms, making sure she’s okay, he explains, “I’m a friend of your son’s.”

“I could tell,” she says, motioning with her hands, “…the cape.”

There, ladies and gentlemen, is the only joke in the entire movie.

Contrast that with the MCU, and you get a completely different picture.  The MCU has built itself on comedy, sometimes to its detriment (Agents of S.H.I.E.L.D., Kat Dennings, etc.), but most frequently to its advantage.  These movies are almost more comedy than action film.  Even the darkest films, like Civil War and Winter Soldier, are rife with good nature and humor.

In this universe of closet comedies, three movies stand out as the funniest: Guardians of the Galaxy, Iron Man, and Ant-Man.  It’s the latter of these that is the focus of this review.

Ant-Man is the third “new addition” to this countdown, clocking in at number 12, two spots ahead of Marvel’s Agents of S.H.I.E.L.D.: Season Three and nine spots ahead of Marvel’s Agent Carter: Season Two.  Considering just how good a movie Ant-Man was, I think this is a testament to how great a year it was for the MCU that we still have three more “new additions” to go.

Now, was it comedy alone that made it good?  For the most part yes, but there’s a little more too it than that.  Like Guardians of the Galaxy before it, the comedy was given life by it’s originality.  It had the same sort of freshness in approach that breathed life into this year’s Deadpool or 2005’s Batman Begins.  I think all four of these movies (GotG, Deadpool, Batman, and Ant-Man), though incredibly different, are all potently similar in the fact that each created its own unique approach to how suprehero movies can be made.  All this despite the fact that all of them are, more or less, origin stories.

I’ve heard a lot of people decry origin stories over the last several years.  I think that the multiple Batman and Spider-man franchises have put a distaste in people’s mouths for origin stories, a taste only further exacerbated by the miserable Fantastic Four movie that came out recently.  They are tired of seeing the same origin stories rehashed over and over again.  One advantage, these detractors say, to the MCU is that it has created a world where origin stories are no longer necessary.  There is now a status quo of superdom, and moviemakers no longer have to explain the phenomenon to us.

I can see where this school of thought is coming from, but I’m not enrolling. The fact is—and this may just be a matter of personal taste—but I enjoy origin stories.  I think they’re fun.  Granted, I probably don’t need to see the spider bite anymore.  But, for the most part, I enjoy watching the initial transformation, the ritualistic first rite of passage into this new identity that the characters undergo.  I enjoy watching them grapple with that identity, and the process of creation that they undergo along with the development of their newfound abilities.  I would very much like to see a Black Panther origin story.  I would like to see a Jessica Jones origin story, or a Luke Cage origin story.  I certainly enjoyed seeing the Ant-Man origin story.

For one, the Ant-Man origin story is a special one.  No latent powers.  No righteous vendetta.  No mutations.  Here we have a petty criminal who gets a chance at redemption by putting on a special suit.  He didn’t invent the suit.  He, at first, doesn’t care a whole lot about it.  It isn’t flashy.  It’s even a little weird.  But, he’s an adaptive person, and a good one, too.  So, he puts on the suit.  Fortunately, the rest is not history yet, because we still get more Ant-Man in a coming sequel (where we finally get to see the last member of the original Avengers, The Wasp, in action) and the Avengers: Infinity War movies.  (I do not italicize that title on purpose, because supposedly, that will not be the title of the Infinity War movies).

The fact that the movie is original despite the fact that it is an origin story (the shared root of those words has not escaped my notice), provides the perfect atmosphere for the comedy to develop.  This is where the laughs come in, and there are a lot of them.  First, I have always felt like Paul Rudd’s abilities as a comedian were timely.  He was a fantastic casting decision by Marvel studios.  Obviously, so was Michael Douglas.  On top of that, so was Evangeline Lilly and Corey Stoll.  Michael Peña…maybe not so much.  But he wasn’t terrible. 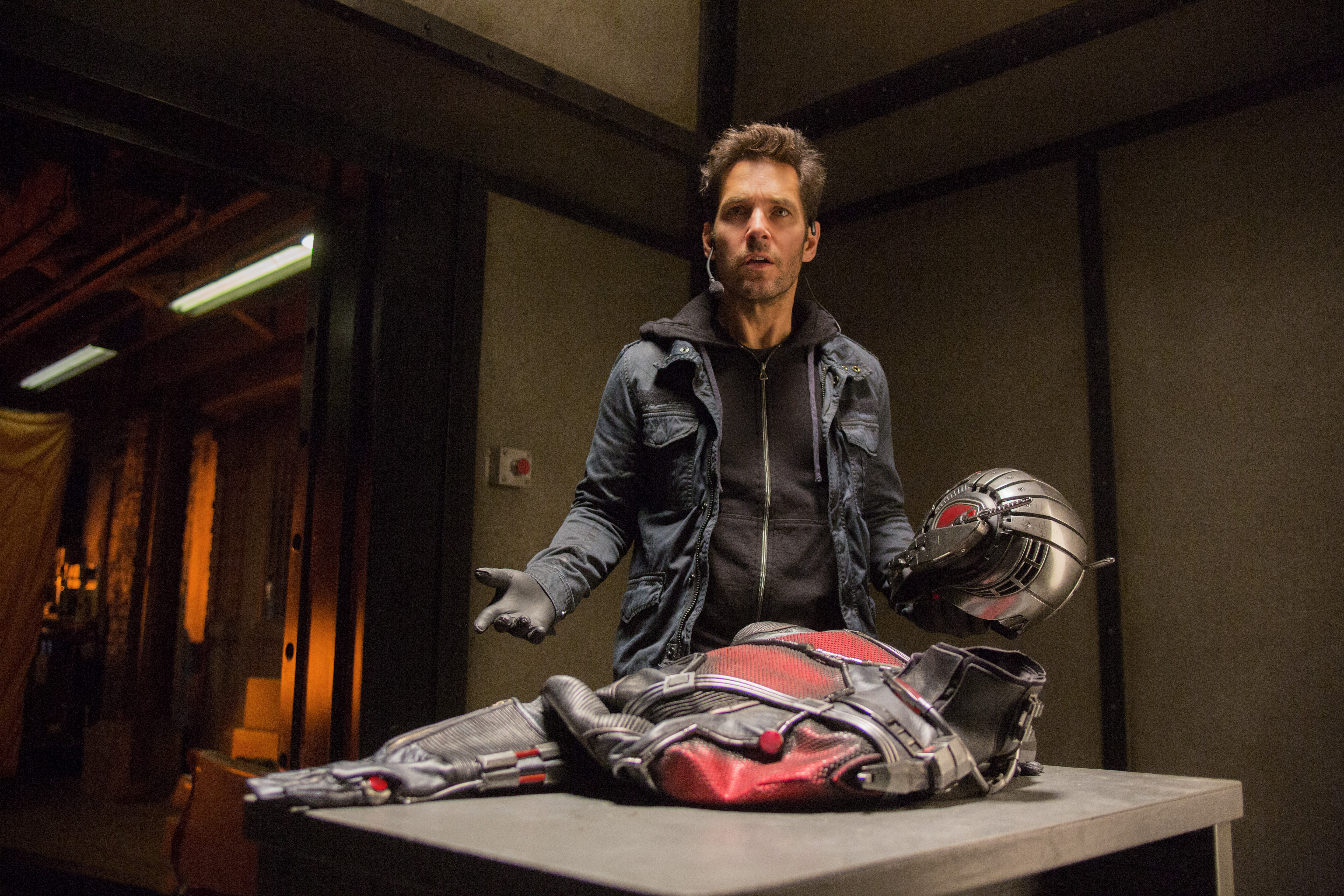 I wouldn’t call Peña’s character a low point (he’s certainly better than Darcy), but there were low points to the film, including a meta-marketing middle scetion.  Unlike Iron Man 2, however, which dedicated a third of its story-line to teasing The Avengers, Ant-Man only dedicated a short fight scene in the middle of the movie to tease the coming events of Civil War.  While this may have done the movie a disservice, it, like Peña’s performance, wasn’t an irreparable disservice.  For the most part, the movie stayed on point, but never too on the nose.  Just the sort of refreshing popcorn-movie experience that we all want in a superhero movie (whether we admit it or not, DC fans).

Telling the story of Ant-Man as a heist caper gave additional depth to the relative shallowness of the superhero genre, and keeping the stakes personal, rather than global, was a good move.  As one critic put it: “Ant-Man stands apart from the rest of the Marvel pack simply by being small.”