I was nervous going into this one that I wasn’t going to like it.  Obviously the main reason was because I had never read a Jessica Jones comic book. I had only passing knowledge of who she was.  I was nervous that Marvel was going to make her story one of the more angst-driven feminist tales that are all-too-common these days.  There’s a delicate line between talking about the issues and getting political, and too often, that line gets crossed.  I was afraid that Jessica Jones would do just that.

My fears were never realized.  The first season of Jessica Jones was awesome, in its presentation, in the story, and in the performances of its actors.  It was similar enough in atmosphere to tie it into Daredevil, yet unique enough in its graphic design to set itself apart.  (Though I will admit, I found its cinematography and use of graphic far inferior to what we get in Daredevil.  Speaking as the Film Sage, not quite as a comic movie geek, I think that is why Daredevil remains my preference between the two shows). Never did it pretend to be a social commentary, though it was brave enough to venture into issues of gender roles, human sexuality, PTSD, and domestic violence.  The show was never about these things, but its characters had to deal with them.  Because these issues were internal, rather than external, the show never got preachy but was always heavy with real emotion.  Jessica Jones succeeded in its mastery of subtlety where Agent Carter was not so successful.

While its violence does not rise to the levels of Daredevil, it is certainly one of the more gruesome chapters in the MCU.  It is definitely the most sexualized, though not with anything too graphic.  I don’t think that the sexualization did the show any favors: including more sex than ever before in the most female-centric MCU story (besides Agent Carter) seems to run counter to the feminist morality.  That note aside, however, there is a literary virtue in the love making.

This is because the line between consent and assault is a preeminent theme in and throughout season.  Jessica (played masterfully by Krysten Ritter) suffers from severe emotional trauma brought on by her stint in the thralls of the flamboyant Kilgrave (played by David Tennant).  Kilgrave was, literally, her master: see, he’s the Purple Man, a villain with the power to manipulate all around him by merely speaking to them, telling them what to do.  He was first introduced in Daredevil in the early 1960s, but recently re-emerged in the comics as the primary antagonist in the Alias, or Jessica Jones, comic book series.  He triumphs through manipulation, and seems to enjoy the personal nature of such power.  You will notice that throughout the series, he has no illusions of great authority, he doesn’t seem to want to take over the world.  He enjoys the seclusion of his domination.  The whole thing reeks of some strange superhero equivalent of S&M; it especially reeks of rape. 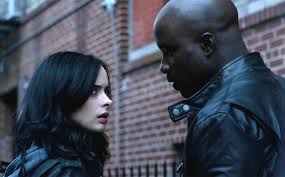 This is not a light concept, and Jessica Jones’ time (which we only briefly see, in flashbacks) as Kilgrave’s puppet weighs heavy on her.  Yet, she believes that she can carry it alone.  After all, she is super strong.  This interesting dichotomy between physical strength and emotional instability is the central element of the this story, and, while it seems to be, in some form or another, the driving theme behind every superhero tale, it has never been as up-front as it is here.

That is why her friendship with Patsy Walker (“Hellcat” in the comics) is so important.  That is also why her romance with Luke Cage, or Power Man (though he has yet to go by that name in the series), is probably the best romance in the MCU.  Without giving too much away, the two truly need each other.  But, in order to get to that point, the barriers need to get torn down, honesty must take hold, and evil must be either lived with or destroyed…but certainly not embraced.  It’s being able to see her character go through all these levels that causes Ritter’s performance to be, truly, one of the premier performances of the Marvel Cinematic Universe.

Yet for all of that, she doesn’t steal the show entirely. Tennant’s performance as Kilgrave was inimitably menacing.  Though he was never as scary or intimidating, in my opinion, as D’Onfronio’s Kingpin, his menace is more gendered.  A woman that I work with told me, after hearing that I preferred Kingpin to Kilgrave because Kingpin just seemed more…immense, I guess…that she was not surprised my preferences lay where they did.  Kingpin scares men, she said.  But Kilgrave is more of a gendered villain.  He is the worst of villains in the female eye.  I thought her observation was really quite on point.  In a show where other antagonists—or potential antagonists—abound, like Frank Simpson (“Nuke”) and the cutthroat lawyer Jeri Hogarth (who, in the comics, was a man named Jeryn Hogarth, a personal friend of Iron Fist’s and attorney for the “Heroes for Hire”), clearly, Kilgrave reigns supreme.

Here, in Jessica Jones, we have a personal battle that, specifically because it was personal, creates the most frightful and real threat in the Marvel Cinematic Universe.  As truly awful as it is to think of aliens coming down from the sky (a memory that haunts Jessica Jones, Luke Cage, and all the others in Hell’s Kitchen), for us, the viewers, it is the battles like this that are truly terrifying.