If TV-MA is the equivalent of an “R” rating (which it is), then Daredevil, Marvel’s first foray into Netflix territory, is the first “R” rated programming in the history of the MCU.  At the time of its release in 2015, we had yet to see the darkness to which corruption in the world of superheroes and supervillains could reach.  Its rating, though, and its darkness, don’t matter all that much.  Because it’s good.  It’s so good, that I even put it ahead of the first Iron Man movie in last year’s list.  This year, it wasn’t so lucky.  Perhaps it was the fact that I had just finished it, or maybe was the fact that I needed to rewatch it, but, it drops two spots this year.  The first Iron Man film returns to where it probably should have been last year, and the last of the six “new additions” moves it down yet another notch.  But, like its TV-MA rating, it doesn’t matter.  Daredevil is good.  While the other Marvel television shows have been good at times, bad at others, and spotty all times in between, this is one series that deserves to be included in this “Golden Age of Television.” 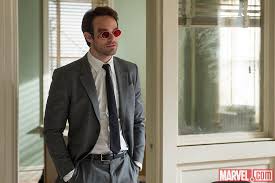 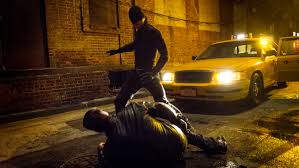 With two seasons of Daredevil under our belt, and one season of Jessica Jones, we are beginning to see more of that street-hero, Hell’s Kitchen storytelling that has been so popular since the 1960s.  With the trailer for Luke Cage appearing at the end of season two of Daredevil, we now await only the upcoming Iron Fist series (Easter Eggs for whom were abundant in Daredevil).  Following these shows, Marvel plans on using Netflix as a springboard to a Defenders mini-series.  We’ve had The Avengers, with all their cosmic combustions.   Soon, we will get The Defenders.  And it’s not like Marvel is biting off more than it can chew.  That would only be the case if Daredevil wasn’t any good.  But it was good.  Very.  And the same thing goes for Jessica Jones.

The story of Matt Murdock, the good, Catholic, blind lawyer (all of those characteristics are important) whose blindness left him with lightning quick reflexes and heightened senses of smell, touch, and hearing, is certainly the darkest of all the Marvel stories, except for, perhaps, the Punisher.  But the Punisher was more bad than good; with Daredevil, you never have to question his motives.  He’s the sharpest form of vigilante.  He also introduces a new form of intellectualism to the MCU.  Intelligence in the MCU has been shown only from the angle of science, as if true geniuses can only be versed in astrophysics.  With Matt Murdock, we have a new type of smart person, one who deals with the social sciences.  And he tries to use his mastery of that to bring down what may be the single most menacing and best-acted bad-guy in the whole MCU. 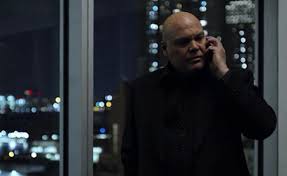 That bad guy is played by Vincent D’Onfronio.  At first, you are haunted by his strange accent, his almost autistic compulsions, and his shy demeanor.  Then, you find yourself tormented as he slams a car door on a man’s head until it explodes.  (Did I mention this was rated TV-MA?)  He seems so human, and yet he seems so invincible.  He truly is the Kingpin of Hell’s Kitchen.

The tie-ins to the rest of the universe aren’t important, and that is why this movie succeeds so much more than Agents of S.H.I.E.L.D. does.  Sure, we come to understand that Hell’s Kitchen is in the shape that its in because it took the brunt of the destruction during the Battle of New York.  But that’s about the only thing tying it together.  But, if you don’t mind, I’d like to geek out a little and speculate…we get a good look at the Oriental/ninja/mystic side of the Marvel Universe in this story.  Might we be expecting the mystic side and ninja side to introduce us to the dark magics….the very dark magics that produced Doctor Strange, for whom a movie starring Benedict Cumberbatch is forthcoming.  Doctor Strange is one of the coolest of all Marvel superheroes (and most powerful).  That would be interesting.

Perhaps more than anything, it’s visually where Daredevil surpasses the other television shows, including its closest competitor, Jessica Jones.  The photography in the show suffers at times from being too dark—something that was mostly remedied in the second season—but it’s in the show’s juxtaposition of parts, be they props, characters or images as a whole that make it click.  Whether in a long-shot or in a rapid montage, this creation of an image is crisp and well-conceived.  The symbols of Catholicism, blindness, mortality, corruption, law and virtue are peppered throughout the frame, yet never overdone.  Visually, it seems, the show has developed its identity.