But this movie isn’t about any of them.  It’s about Thor and Loki.  And, with this, the best sibling rivalry in the MCU, we are given our most powerful superhero as well as our most beloved villain.  There are certainly many weaknesses to this film (it’s ranked the third lowest out of the eleven feature films that have been released up to this point), but what it does have going for it is that it, perhaps more than any other MCU film, changed everything.  This movie is the hinge point upon which the whole universe swings, opening more doors and introducing more plot elements than any other film in the history of this vast cinematic project.  And that includes its two key characters.

Banished to earth to atone for the threats he has caused to descend upon his homeland of Asgard, Thor, the Norse God of Thunder, must protect his newfound mortal friends from otherworldly threats….

Suffice it to say, this was a huge gamble for Marvel.  They had dealt with the realms of science and human enhancement with Iron Man and the Hulk.  But this, this was way different.  They were dealing with magic (which is nothing more than advanced science) and aliens, now.  And, boy, did it pay off. 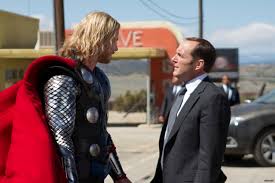 Without Thor, the introduction of the Tesseract in Captain America: The First Avenger would have been completely out of place.  No Red Skull.  No HYDRA.  No HYDRA means no Captain America: The Winter Soldier, and we would have had a completely different conclusion to the first season of Agents of S.H.I.E.L.D., let alone the entire second season with all its reference to Inhumans, Terrigen Mist and alien blood transfusions.  Guardians of the Galaxy is already a film that feels a little out-of-place in this universe.  Imagine how out-of-place it would feel without the connecting tissue of Asgard and the Nine Realms as we know them? 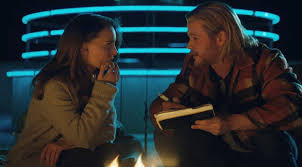 The fact that all of this worked out is why Thor turned out so well.  It is a linchpin.  However, it does have many weaknesses.  Kenneth Branagh, who, in many ways, is our generations version of Laurence Olivier, was entrusted to make this rather Shakespearean world come to life as only he could.  At times, he succeeded.  But, ultimately, he delivered what is likely the most boring of the Marvel movies.  I will say, though, that those first few scenes with Thor on earth are pretty fun to watch.  All in all, this is a movie with strengths and weaknesses, just like any other movie.