The best of all the Marvel One-Shots is “Agent Carter.”  And I’ll tell you why.

What the MCU gave us was a world of consequences.  All the superhero movies that came before dealt with an isolated hero, whose actions only effected his or her own sphere.  They gave us movies that kept us in that single sphere, and we were never able to see a world that existed outside of that sphere.  What the Marvel Cinematic Universe has done is it has shown that things go on in all 50 states, not just in one at a time.  Stories intertwine, and consequences are dealt with from one place to another.  One reason why I think “Item 47” worked so well as a short film was that it showed how these things and events exist outside of the lives our superhero friends, that there are other stories that have to exist, whether they are told or not, in this universe of superpowers and science.  That’s why, despite many failures, the Marvel Cinematic Universe works.  It helps us create a world of our own, and lets our imaginations run free.

Marvel comic books created this kind of universe way back in 1939 when they were founded as Timely Comics.  By 1961, they were Marvel, and came out with their first comic, The Fantastic Four.  They moved through the decades and were soon on TV, in animation and in live-action.  The comics gave us a fun and unbelievable universe, but to make it more believable, would often feature short-stories and other segments that would act as companion pieces to the story in the main issue.  Not unlike opening acts in a concert, or B-movies at an old movie theater, the comics would give us the headlining story in the bulk of the book, but would also give us one or two smaller stories that made up their own element of Stan Lee’s integrated world.

“Agent Carter”, the best of the One-Shots, acts like one of those side stories.  It gives life to the Marvel Universe in that it takes us out of the sphere of the superheroes and into a land that is dealing with their consequences.  It gives us a character that we love, and, so doing, went on to introduce a series of stories about that character that would later be seen on television.  This One-Shot introduced the Agent Carter television show, and has given us a much needed “companion story” to the “headlining stories” that are the feature films.

Cinematographically, this One-Shot is the finest photographed.  Taking place mostly at night in the mid-forties (after the end of World War II, and consequently, the death of Captain America), we are given a fantastic adventure/spy story of a feminist herald as she lays waste to criminals and beats the misogynist culture that is keeping her down.  Because of the period nature of the piece as well as the setting, the lighting is key, and the filmmakers don’t disappoint.  This overtone and coloration worked so well that it was basically replicated on the bigger stage when Agent Carter came to network television.

We follow Agent Peggy Carter, the woman who loved Captain America, and the woman whom he loved in return, as she is harassed and under-valued at the SSR, the predecessor to S.H.I.E.L.D..  All the guys go out for drinks, leaving her at the office to finish up some paperwork.  (The obvious attempt at Mad Men-like socio-sexual politics and commentary is a little blatant, but so was Mad Men, to be honest….anyway, more on that later).  Being alone at the office, she is the only one able to hear what can only be fairly labeled as the “Bat-Phone”, informing her that a 3- to 4-agent, time sensitive mission is urgent.  Of course, she decides to take on the mission herself. 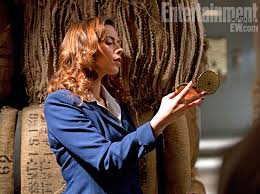 The only real weakness to the short film is the ending, when Howard Stark shows up with a promotion for Peggy that ultimately shuts up everyone in the office.  Doesn’t that kind of cancel out the whole “she-doesn’t-need-a-man-to-save-her” point of the whole story?  Well, maybe.  But it doesn’t matter all that much.  It’s a fun story either way.