Perhaps the most unique and original of the Marvel One-Shots is “Item 47”, the story of Benny and Claire, who find the last remaining piece of Chitauri weaponry after S.H.I.E.L.D.’s clean-up of the Battle of New York in The Avengers.  Benny, who has figured out how to use the weapon, is convinced by Claire, his girlfriend, to use it to get them rich.  From there ensues a fun montage of bank heists that show that the pair is amateurish at best, but finding success using this unparalleled piece of weaponry.

Of course, they can’t escape the watchful eye of S.H.I.E.L.D. for long, and, before we know it, we are re-introduced to Agent Sitwell, whom we met for the first time in “The Consultant.”  We are also introduced to Agent Blake, played by Titus Welliver, who is now enjoying a little success over at Amazon for his new television show Bosch.  These two characters, we will later learn (via television shows), work at “The Hub”, one of the central bases of S.H.I.E.L.D. operations, not unlike the Triskelion, which we see in Captain America: The Winter Soldier.  These two take it upon themselves to end the fiasco of these bank robbers. 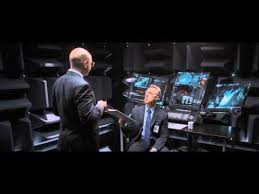 Well, as is predictable, S.H.I.E.L.D. wins out in the end and Benny and Claire (played by Jesse Bradford and Lizzy Caplan) are recruited to join S.H.I.E.L.D.  This is our first real glance at the “agents” element of S.H.I.E.L.D., as opposed to the superhero side of the S.H.I.E.L.D. staff.  We are now made painfully aware of the recruiting style of the bureaucracy and can’t help but think that maybe they make some personnel mistakes.  Of course they do, HYDRA has to show later on.

The story, in and of itself, is actually pretty fun, and is by far the best example of story development and montage in the Marvel One-Shot business.  It does a great job standing on its own and doesn’t take us long to introduce us to some fun new characters.  (I mean Benny and Claire, not Blake and Sitwell).  The not-so finely veiled reference to Bonnie and Clyde is clever.  Not only do the names sound alike, but the gender orders are reversed.  And, just like in Arthur Penn’s masterpiece, when Clyde is the one who pushes Bonnie to go along with everything, it is Claire who does the pushing in this one.  Cultural references and gender reversals have long been a staple of good cinema.  Turns out it makes for a good short film, too.

If Marvel were to make a movie about Bonnie and Clyde, it would never work out.  But, a short film that has no real bearing on the MCU can have these obvious homages and still work.  I’m glad that Marvel is willing to do these sorts of things.